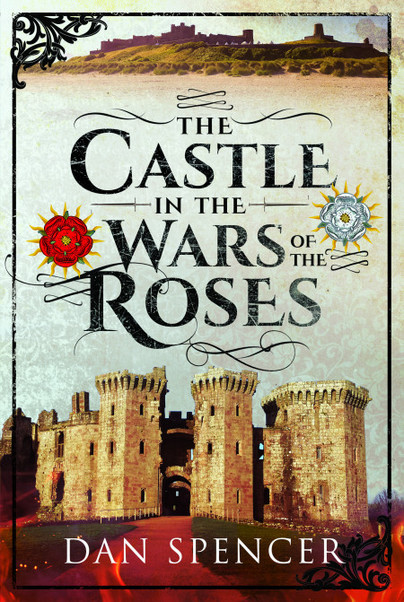 The Castle in the Wars of the Roses (Hardback)

Preorder
You'll be £20.00 closer to your next £10.00 credit when you purchase The Castle in the Wars of the Roses. What's this?
+£4.50 UK Delivery or free UK delivery if order is over £35
(click here for international delivery rates)

The Wars of the Roses is one of the most dramatic and fascinating periods in medieval history. Much has been written about the leading personalities, bitter dynastic rivalries, political intrigues, and the rapid change of fortune on the battlefields of England and Wales. However, there is one aspect that has been often overlooked, the role of castles in the conflict.

Dan Spencer’s original study traces their use from the outbreak of civil war in the reign of Henry VI in the 1450s to the triumph of Henry VII some thirty years later. Using a wide range of narrative, architectural, financial and administrative sources, he sheds new light on the place of castles within the conflict, demonstrating their importance as strategic and logistical centres, bases for marshalling troops, and as fortresses

Dan Spencer’s book provides a fascinating contribution to the literature on the Wars of the Roses and to the study of siege warfare in the Middle Ages.

Dr. Dan Spencer's expert knowledge is astounding! This gripping book has really been eye opening and improved my knowledge of the Wars of the Roses and the roles castles played during the 1450s to 1480s.

Castles have fascinated me all my life so to learn more about them (I've visited most discussed in the book) is truly enlightening. The Wars of the Roses certainly is a fascinating period in history and the detailed explanations of who was involved and why is super helpful. Castles are much more beyond fairytales and acted as protection and defense from foreigners as well as fellow countrymen, show of power, to control travel routes and to serve militarily. They were designed to keep people in and out.

The structural descriptions were fascinating but not as in depth as expected. However, that did not detract from the book. The maps, illustrations and photographs made the words really pop.

Vivid and intelligent descriptions certainly filled in the blanks which I wasn't even aware were missing! Extremely well researched, this book is a must for those interested in castles and/or the medieval era including the Wars of the Roses. You will learn more about those involved than you expect!

The work is an amazing overview of medieval military history and as the name suggests, mainly the important role of castles, from symbolic to strategical roles and functions of castles during the War of Roses.

The Castle in the Wars of the Roses by Dan Spencer is both an accessible and interesting read that fills in some gaps in the usual history of the conflict(s).

I loved this book. I thought it was really well researched, engaging and, for a subject as complicated as the wars of the Roses, easy to follow. It has really broadened my understanding of the Wars, because up until now I feel as if much of what was studied and written about was the politics - the characters, and what they did and said. Now with this book we have the backdrop and it gives a new dimension to the topic. Learning about how the castles were garrisoned, divided up and besieged also gave me a bigger, rounder insight into the period. A really interesting read, and I'd recommend it to anyone with an interest in the time period. Bet you'll start making a list of castles to visit after this!

When one thinks about Medieval Europe and buildings, we tend to focus on the luxurious castles with their impenetrable walls. It is a rather glamorous image, but the problem is it is not accurate. Castles were used for defensive measures to protect the kingdom from attacks, either from outsiders or, in some cases, from within. Medieval warfare and castles go hand in hand, but one conflict where we tend to forget that castles play a significant role is in the civil war between the Yorks and the Lancasters, which we refer to today as The Wars of the Roses. Dr. Dan Spencer has scoured the resources that are available to find out the true role of these fortresses, both in England and in Wales, in this complex family drama that threw England into chaos. His research has been compiled in his latest book, “The Castle in the Wars of the Roses”.

I would like to thank Pen and Sword Books and Net Galley for allowing me the opportunity to read this book. I enjoy studying the Wars of the Roses and when I heard that this book was coming out soon, I knew that I wanted to read it.

To understand this transition that castles and the roles they played during this tumultuous time undertook, Spencer, takes us on a journey from the Norman Conquest to the 1450s. It was informative to see how castles transformed to fulfill different roles over distinct periods.

Spencer’s book shares some similarities with previous books that I have read about the Wars of the Roses in the fact that it does highlight the main battles and the main people who were vital in this conflict. However, Spencer’s book dives a bit deeper into the military aspects of the wars to show what makes this conflict so unique. What makes the Wars of the Roses so fascinating is that, compared to other famous medieval wars, castles were not the central focus for battles. Instead, castles during this period were used for garrisons, headquarters for military commanders, and as tools to show political favor for whoever was on the throne.

The true strength of this particular book is Spencer’s meticulous research and his scrupulous attention to detail. He was able to combine narrative, administrative, financial, military, and architectural records to create an illuminating manuscript that gives an extra layer of depth to the Wars of the Roses. It did take me a while to get used to all of the minor characters and the castles that I had never heard of before, but once I did, it was absorbing. We tend to focus on the major characters during the 15th century, but they would not be as legendary as they are today without the help of countless men who have been forgotten for centuries. The one problem that I did have with this book is a minor issue and that was when he said Henry VII married Elizabeth Woodville, not Elizabeth of York.

Overall, I found this book extremely enlightening. I thought that I knew quite a bit about the Wars of the Roses, but Spencer was able to surprise me with the amount of new information that he included in this tome. It opened a new aspect of this conflict that I never considered before. If you are someone who enjoys studying the Wars of the Roses and medieval castles, “The Castle in the Wars of the Roses” by Dan Spencer is a book that you should include in your collection.

The Wars of the Roses is one of the most fascinating periods of British history and I've been interested in it for a few years now. Despite my interest I had never really given much thought to how the castles were used during this time.

Dr Dan Spencer provides not only details of transfers of castles throughout the period but also how they were manned, details of artillery and even wages earned by those employed at the properties.

The castles were used for strategic purposes but also as rewards for loyalty, punishments for those deemed disloyal and possibly bribes to change someone's loyalty and ensure specific areas were protected from and prepared for rebellions. Those granted castles would be responsible for defending them often at their own cost but would also provide wealth and could often be a status symbol.

The battles of the Wars of the Roses are discussed but with reference to the importance of the castles nearby and sieges places on them. The occupancy of castles was an indication of where those loyal to York or Lancaster could flock to if required.

It is a really interesting read and provided me with a lot more knowledge about the Wars of the Roses, an area I am particularly interested in.

This is clearly the result of meticulous research and I would think would be of great interest to anyone interested in the Wars of the Roses.

Most of us are familiar with the Wars of the Roses, even if all you know about is that a king was deposed, and a new king installed.

The Castle in the Wars of the Roses takes us through the conflict, placing emphasis not on the players, but the locations. While the players were important, the locations were just as important as the key figures. The castles that are discussed, their placement, and their garrisons were essential during this conflict.

I absolutely LOVED this book! I have always been fascinated by the Wars of the Roses, but this book took a unique view and helped me to better understand the logistics and many of the other issues that would not have been possible, without a castle for defense.

Place this on your to-read list! It is the MUST HAVE book for fall!

I very much enjoyed reading 'The Castle in the Wars of the Roses'. As someone from Lancashire (whose cat is, in fact, named Bosworth), I knew a largely one-sided account of the war itself; this novel helped broaded my understanding on equal sides. Thank you to Dr Dan Spencer for this book, and to Netgalley, and Pen and Sword for allowing me to read this.

Dr Dan Spencer has made a special study of late medieval warfare, focusing in particular on gunpowder artillery and castles. Recent publications include The Castle at War in Medieval England and Wales and Royal and Urban Gunpowder Weapons in Late Medieval England. To find out more visit danspencer.info or follow him on Twitter and Instagram @Gunpowderdan.