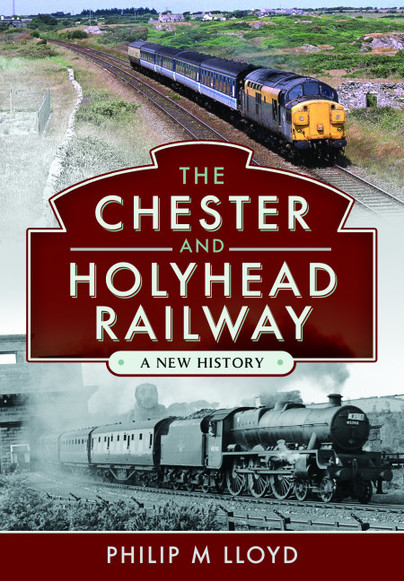 The Chester and Holyhead Railway (Hardback)

Add to Basket
Add to Wishlist
You'll be £27.00 closer to your next £10.00 credit when you purchase The Chester and Holyhead Railway. What's this?
+£4.50 UK Delivery or free UK delivery if order is over £40
(click here for international delivery rates)

The Chester and Holyhead Railway is one of Britain’s most important main line routes, connecting London with mainland north Wales, and the Isle of Anglesey.

The line was completed in 1850 under the direction of Robert Stephenson whose work included the famous tubular bridges that cross the river at Conwy and the Menai Straits near Bangor, the latter one destroyed by fire in 1970.

The line was built primarily to support British rule in Ireland but was later instrumental in developing north Wales as a major tourist destination. Today the railway remains an important part of the Welsh and UK networks, providing trains that link north Wales with Cardiff and major English cities, as well as connecting with ferry services to Ireland.

"There is also a fascinating appendix where every mile of the line is linked to an incident or photograph. The book is mostly text but with a good range of well produced illustrations. It provides a thorough overview of the imapct of the CHR on North Wales and its key role in the area's development. It will be of special value to those with an interest in the history of railway development"

"It provides a thorough overview of the impact of the CHR on North Wales and it's key role in the area's development. It will be of special value to those with an interest in the history of railway development."

The Railway Correspondence and Travel Society - The Railway Observer, May 2022, Volume 92, Number 1119

It offers a different perspective of a well-known and much loved railway and can be warmly recommended.

A well illustrated and researched work.

Another interesting read with much to offer.

"This is a useful and eminently readable addition to the histories of this rail route."

"It is always a pleasure to review a railway history that introduces new dimensions from primary sources, is well written and is evenly balanced between the political, business and operational."

"It is thoroughly recommended, and was a pleasure to review."

"A good readable account of a railway with a distinctive history. Other railway historians could usefully learn from this book."

"I have no hesitation in recommending this superb book to anyone who has an interest in north Wales and its railway history."

There has been for some time a need for a comprehensive history of the North Wales line, and a very significant one has arrived on the market.

Author Philip Lloyd describes his book The Chester and Holyhead Railway; a New History as 'the culmination of a lifetime's interest in the line', and this is evident throughout its 276 pages.

This is a modern book, hardback on quality paper with many photographs, in colour when possible, including some by names well-known to our readers such as Dave Sallery and the late John Hobbs. The result of much research, this is a very readable history book, centred on people and events, without the technical details of locomotives or performance logs favoured by some other authors.

I was delighted last week when The Chester and Holyhead Railway by Phil Lloyd was published a few weeks ahead of schedule (well done, that publisher!). As usual with Pen & Sword, the illustrations (colour and monochrome) are reproduced to a high quality.

The two previous books on the line – JM Dunn’s and Peter Baughan’s – were published in 1948 and 1972 respectively, so it’s about time we had a fresh perspective. Dunn and Baughan both only really cover the operational and building aspects of the line, so Lloyd is the first to really discuss usage.

What do we get for our money, then? We get 227 pages of text plus appendices, index and lots of references. Lloyd rightly devotes a chapter to the battle over the potential routes: Chester to Holyhead, backed by what became the LNWR; the George’s Harbour Railway that proposed Llandudno as the terminus of the sea-route to Holyhead; and the Porth Dinllaen Railway, backed by the GWR. The purpose of the line was to speed up communication between London and Dublin. The Holyhead route triumphed and in May 1850, the Prime Minister, Lord John Russell, announced that “a steamer arrives in Kingstown harbour at half-past ten at night, conveying the intelligence which has left London the same morning.”

Lloyd is good on the contradictions involved in managing the railway. On the one hand, the line was built to transmit papers and people between London and Dublin and management wanted to ignore the Welsh coast along which it passed. On the other, local rail traffic around the country was proving to be profitable and so it was worth engaging with the businesses and community on the Welsh coast. The LNWR’s decision to sack employees that didn’t speak English was a public relations mis-step and the 1867 Reform Act meant that MPs had to pay more attention to their constituents – who were no longer just the landed gentry, but a larger number of middle-class householders.

A one might expect, given that the Abergele smash was such a tragedy, there is a chapter on accidents. The siding that caused he problem had never been inspected or approved by the Board of Trade. Lloyd suggests the fault lay with Peto, the former Chairman who put staff under pressure to open sidings and boost revenue.

Tourists were coming to North Wales before the railway arrived. Lloyd covers the growth of tourism from the 1850s through to the 1960s, showing the LNWR’s growing symbiotic relationship with the resorts, including the North Wales Advertising Board, before the mass defection to road.

Overall, I can thoroughly recommend the book.

Phil Lloyd was born in Stockport and has lived in the north-west of England all his life, apart from a first degree in history at York from 1971. He gained an MA (Econ) and social work qualification at Manchester University in 1978 and worked as a probation officer until 1998. He led Youth Offending Teams in Manchester and Cheshire before managing in social care in Cheshire. He retired from his post as a director in Cheshire East in 2011 and completed a doctorate in Railway Studies at York in 2017. He now lives in Merseyside with his wife Ceri and spends a lot of time in north Wales.