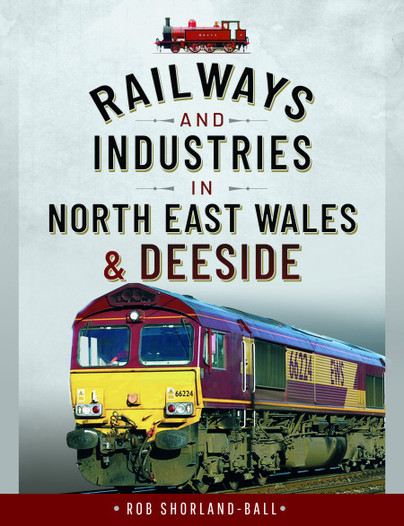 Railways and Industries in North East Wales and Deeside (Hardback)

Add to Basket
Add to Wishlist
You'll be £17.50 closer to your next £10.00 credit when you purchase Railways and Industries in North East Wales and Deeside. What's this?
+£4.50 UK Delivery or free UK delivery if order is over £35
(click here for international delivery rates)

Rob Shorland-Ball's researches for this book, and several visits, convinced him that he was putting together a jigsaw of facts. No previously published account of the area have brought together these stories of iron & steel making, limestone quarrying, coal mining, terra cotta, lead mining, and the railway systems they all needed to move their products to market.

There were narrow and standard gauge railways – 80 miles of tracks in the Shotton Steel Works; industrial sites like Brymbo Iron and Steel Works; and since 2003 the Airbus factory which makes 100ft long wings for Airbus 380s that are too long to be moved by rail!

A jigsaw indeed and this books puts together the pieces.

"This is a well written book, and should be of use to anyone interested in the industrial development of this area."

A profusely and colourfully illustrated and well researched work that explores the Railways and Industries of North East Wales.

An interesting and informative read.

North East Wales and Deeside have a long and proud history of industrial innovation and development, and these were linked closely to early railway schemes designed principally to move the area’s mineral resources. This new work provides an overview of how coal, iron ore, limestone and other minerals contributed to the area’s economy, the railways that were built to carry them, the growth of the iron and steel industry, and the decline and fall of most of these during the second half of the twentieth century.

"The book does provide a good introduction to the subject, with sufficient detail to encourage a reader to delve deeper. Members with an interest in the area should certainly not be disappointed in adding a copy to their library.

Your reviewer found the book to be an interesting read and, when the warmer weather comes, it will form the basis of an exploration of the railway and industrial remnants in the area. The book is well illustrated with maps, diagrams and photographs. Overall, this is a good read.

"Overall it is a very useful study of the region and a useful work of reference."

"This is a meritorious book for those interested in Welsh railways and good value for money."

"Your best research to all aspects has shown determination to produce a record of times lost to what I refer to as 'The Good Days'.

This work will prove to be an exceptional research volume for personal study, and students alike."