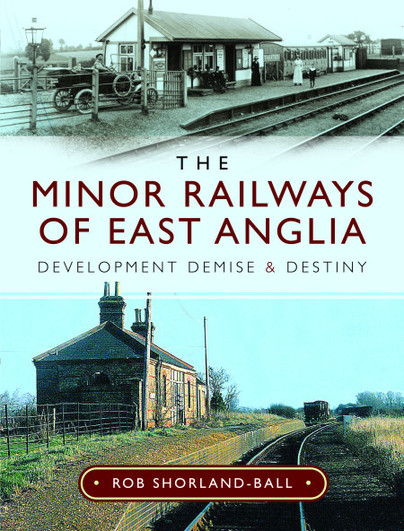 Add to Basket
Add to Wishlist
You'll be £22.50 closer to your next £10.00 credit when you purchase The Minor Railways of East Anglia. What's this?
+£4.50 UK Delivery or free UK delivery if order is over £40
(click here for international delivery rates)

Rob Shorland-Ball is a former teacher and is also a born story teller and is well aware of the strong local loyalties in East Anglia.

Norfolk, Suffolk and Essex are considered to be very different separate and independent areas by their inhabitants

When the author worked in Suffolk he explained that he came from Cambridge which he believed was the front door of East Anglia, an elderly Suffolk man to whom he was speaking, paused for a while and then said, with unarguable finality, here in Suffolk if Cambridge exists at all , it is a back door and rarely used.

The minor railways illustrated in this book were once busy transport links and made vital contributions to the social and business heritage of the area they served.

By the 1950s and 60s, when the author explored them, they were rarely used, so needed to be recorded and their stories told before they were forgotten entirely.

To bring this book up to date, the final section is called Destiny because some of the track beds have survived and flourished with new usage as restored heritage railways, footpaths and cycleways and one route as a busy busway.


"An excellent book aiming at a similar purchasing sector as the Middleton encyclopaedic series, i.e., text, maps and photographs of lines in the area. The main differences to a standard Middleton volume are in the quality of paper used, the overall size of the book, that many of the maps and illustrations are colour rather than being exclusively mono and the amount of history which is included as text. The period covered includes the modern preservation era. If I had an interest in the area covered this is certainly a book that I would buy therefore, as with the books in the Middleton series, a recommended purchase if the geographic area is of interest to you."

Rob Shorland-Ball has written an outstanding book, containing so much information and yet packaged into fewer than 150 pages.

Pen and Sword have produced yet another superb book. It is a quality publication, with excellent well-written text, printed on high-quality paper, and with photographs, maps and track layouts reproduced clearly. There are some outstanding pictures many of which reflect the feel and atmosphere of a minor railway, even though few of us will have actually witnessed this at first hand.

Apart from a nostalgic look back at long forgotten minor railways in East Anglia, this very interesting book covers not only their origins and demise but also their destiny with sections on preserved heritage railways, cycleways, footpaths and even a busway. Highly recommended.

There is a brief history of each of the lines together with maps and period photographs that make this an interesting read for those unfamiliar with the minor railways of East Anglia.

... detailed and well researched, with due acknowledgment to its secondary sources in the bibliography. The author himself admits to being a pedant, and his pedantry seems at times to get in the way of the narrative. This is, however, this reviewer’s very personal perception and there are a significant number of railway enthusiasts who appreciate that approach.

A wide range of illustrations is provided, including many maps and photographs.

The book is well produced with generally good clear photos in colour and black and white.

A book that allows us to travel back in time and get to know these small railway lines in their best times. From the way it is written it is noticeable that the author has a great affection for the area.