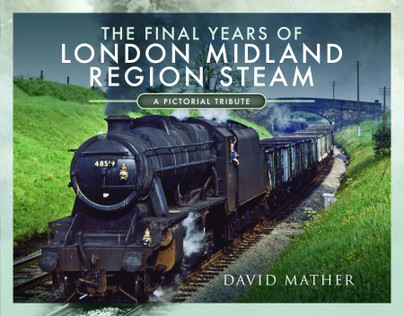 Add to Basket
You'll be £30.00 closer to your next £10.00 credit when you purchase The Final Years of London Midland Region Steam. What's this?
+£4.50 UK Delivery or free UK delivery if order is over £35
(click here for international delivery rates)

The book investigates the vast number of locomotives that came to the London Midland Region in 1948 at Nationalisation.

This is a class by class survey with over 200 illustrations, covering all the top link and freight classes, also looking at the smaller types of locomotive, operating on branch lines and doing more humble tasks.

The author explores what happened to them and also looks at those that eventually made their way into preservation.

DAVID MATHER, originally from Bolton, Lancashire, where his early interests in railways centred on his home shed, coded 26C later 9 K and the nearby West Coast Main Line, which he documented until the end of steam in 1968.

The author relocated to the Midlands and later to York which rekindled his interest in railways and steam traction, the digital era allowing his work to be made available to a wider audience.

Now a photographer and railway author, his most recent book being Exploring the Lake District with the Furness Railway Tours, which has a foreward by Eric Robson, broadcaster and chairman of the Wainwright Society.

The Railways of York was shortlisted for the Ian Allan railway book of the year award, Ian Allan writing the foreward for the authors first book, Running Out of Steam.