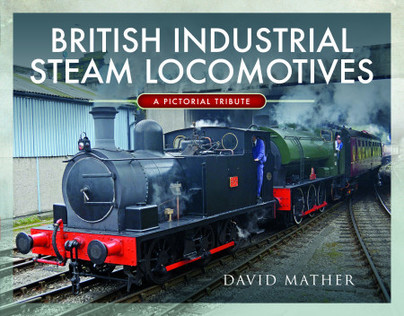 Add to Basket
Add to Wishlist
You'll be £22.50 closer to your next £10.00 credit when you purchase British Industrial Steam Locomotives. What's this?
+£4.50 UK Delivery or free UK delivery if order is over £35
(click here for international delivery rates)

The first steam locomotives used on any British railway, worked in industry.

The use of new and second hand former main line locomotives, was once a widespread aspect of the railways of Britain.

This volume covers many of the once numerous manufacturers who constructed steam locomotives for industry and contractors from the 19th to the mid 20th centuries.

David Mather has spent many years researching and collecting photographs across Britain, of most of the different locomotive types that once worked in industry.

This book is designed to be both a record of these various manufacturers and a useful guide to those researching and modelling industrial steam.

This is a well presented work with a good balance between locomotive portraits and informative narrative, and is sure to find a home on the bookshelves of students of Britain’s industrial steam heritage.

In summary a very useful volume for those researching and modelling industrial steam.

'....a good introduction, hopefully it will encourage some of those who have only been involved during the preservation period to take a wider interest in the historical aspects of the subject'

This pleasing book is produced to the publisher’s usual high standard and is by an author who really knows his subject. It is recommended both for those with a prior knowledge of this fascinating aspect of UK locomotive production and anyone who would like to learn about it.

Any book that encourages interest in industrial locos is welcome, and this book does provide a reasonable introduction.

In summary, then, this book is a detailed yet visual insight in the large variety of industrial steam locomotives built in the UK. This type of locomotives are sometimes overlooked for the bigger express locomotives, but these industrial locos played a crucial role in the progress Britain made, and this book covers this history perfectly.

It is great to see old photographs of the locomotives but also the modern preserved photos for comparison.

This book will appeal to railway modellers and anyone interested in our industrial history, especially as the current locations of preserved locomotives are conveniently listed. The problems with the misleadingly titled contents page and misleading title are irritating but do not prevent this book being highly recommended.

Books On The Line

Well illustrated pictorial survey of industrial steam locos. Arrangement is by maker with pictures of engines at work and in preservation. The variety of makers is astonishing and includes the Sentinel brand. With the cranes theme in this newsletter note that several crane tanks feature including examples from Neilson, Dübs and Andrew Barclay. There are also pictures of Rodley and of Ransome and Rapier cranes plus several pictures of industrial locos built in Britain but working abroad. Informative notes add to the value of this book.

This book, as its title suggests is a pictorial survey of most of the steam locomotives that worked in industry in the 19th and 20th centuries along with a list of the manufacturers. Full of descriptions of both along with colour and black and white photographs this book is a useful reference for wishing to model industrial steam along with the enthusiast.

The high quality of his photographs is something that all fans of steam locomotives and especially fans of railway modelling will appreciate. A great gift for this Christmas.

I heartily recommend this book to both enthusiasts and the casual observer alike. The book serves as a fitting tribute to industrial steam and the often over-looked footplate crews whom formed the backbone of Britain’s erstwhile industrial scene.

Those with an interest in industrial steam locos, or even steam locos in general, will enjoy browsing the pictures, and perhaps learning about loco types and builders that are less well known. Modellers will find it a useful resource for details, liveries, and weathering, and perhaps some unusual loco inspiration. I can see it being a good book to while away some lockdown hours, or as a Christmas present, and why not?

David Mather’s early interest in railways centred around his home shed, Bolton, which remained in operation until the end of steam in 1968. Since relocating to York he has combined his love of railways with his passion for photography to produce numerous books including Riding the Settle & Carlisle, Great Britain’s Heritage Railways, Exploring the Lake District with the Furness Railway Tours, British Industrial Steam Locomotives and The Final Years of London Midland Region Steam.