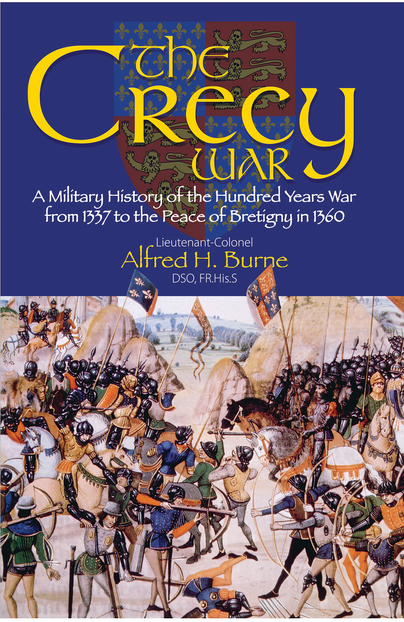 Click here for help on how to download our eBooks
Add to Basket
Add to Wishlist
You'll be £4.99 closer to your next £10.00 credit when you purchase The Crecy War. What's this?
Need a currency converter? Check XE.com for live rates

Crecy, the Black Prince’s most famous victory, was the first of two major victories during the first part of the Hundred Years War. This was followed ten years later by his second great success at the Battle of Poitiers. The subsequent Treaty of Bretigny established the rights of the King of England to hold his domains in France without paying homage to the King of France.
In this hugely-acclaimed military history Colonel Burne re-establishes the reputation of Edward III as a grand master of strategy, whose personal hand lay behind the success of Crecy. He convincingly demonstrates that much of the credit for Crecy and Poitiers should be given to Edward and less to his son, the Black Prince, than is traditionally the case.
With his vigorous and exciting style, Colonel Burne has chronicled for the general reader as well as for the military enthusiast, one of the most exceptional wars in which England has ever been engaged. This book firmly restores the Crecy campaign to its rightful place near the pinnacle of British military history.

‘A most important book – a work of original research, written by a master of his subject … A model of how history should be written, packed with accurate information and common sense.’
Sir Arthur Bryant in The Sunday Times.

A good read covering the military history and the characters involved in the war. I would recommend the book as a good overview of the period.

If you are interested in the Hundred Years War or indeed Medieval warfare in general this is a book worth having. I suppose the highest compliment I can pay is that, having read it, I have ordered the same author's companion volume on the Agincourt War.

This is a book that has seriously stood the test of time as it was first copyrighted by the author back in 1955, just four years before Lt. Col. Burne passed away. Burne served with the Royal Artillery during the First World War and served again in the second, assisting with cadet training. With the passing of time this important historical piece of work has been re-published several times, this example by Greenhill Books in 1990 followed again in 2016 by Frontline Books.

For anyone studying the Hundred Years War, this book is a must. The following battles and campaigns are covered within this substantial paperback:- The 1339 and 1340 Campaigns; Brittany to The Battle of Morlaix, 1341-42; Brittany, 1342-47; The War in Gascony, 1345-47; The Crecy Campaign, 1346; The Battle of Crecy; The Siege of Calais; Between Crecy and Poitiers; The Black Prince’s ‘Grande Chevauchee’; Lancaster’s ‘Chevauchee’ in Normandy; Poitiers and Edward’s Last Campaign. While we associate Northern France with the scars of 20th Century battles the vast majority of the battle sites still exist, a good example being Crecy laid out in its full glory; a site I have visited many times.

Burne has put in a great deal effort to identify each site and even the tactics and casualty numbers are recorded for posterity. No mean feat when you are extracting information from 600 year old chronicles in a foreign language. This book is actually Part 1 of the history of the Hundred Years War; Part ‘The Agincourt War’ has been back in print since 2014.