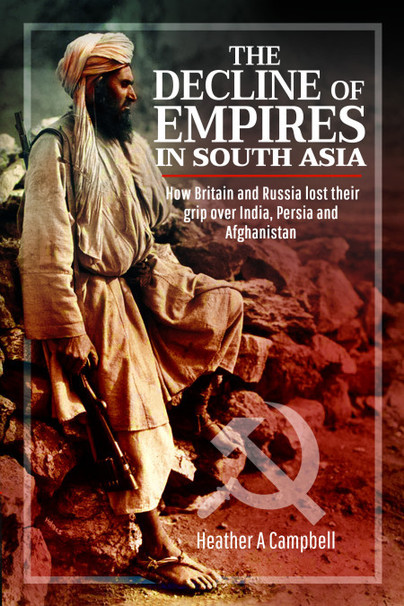 The Decline of Empires in South Asia (Hardback)

How Britain and Russia lost their grip over India, Persia and Afghanistan

Add to Basket
Add to Wishlist
You'll be £14.00 closer to your next £10.00 credit when you purchase The Decline of Empires in South Asia. What's this?
+£4.50 UK Delivery or free UK delivery if order is over £35
(click here for international delivery rates)

The post-First World War period was pivotal in global history, international relations and geopolitics. And no more than in South Asia. where for decades the 'Great Game' in geopolitical rivalry of the two greatest modern empires - Britain and Russia - had dominated international relations. But with the advent of Communism in Russia and growing nationalism and pan-Islamism in Afghanistan, Persia and India, Britian's imperial standing was under threat. Faced with these problems, some in the British government, such as Lord Curzon, the dominant imperialist in the British Foreign Office, fell back on what they knew - old patterns of rivalry and high-handedness that characterised the Great Game. Not all, however, agreed with Curzon, and with war in Afghanistan, civil unrest in India, and rising tensions in Persia, those who opposed this Great Game mindset advocated a new way forward for British foreign relations.

A handsome, well produced volume, as usual with Pen & Sword, and worth reading by anyone interested in Britain’s Indian Empire. It is packed with information despite its narrow scope; the chosen years are well covered.

About Heather A Campbell

Heather Campbell is an historian and political scientist specialising in British and Russian imperial history, the First World War, British policy in India, Afghanistan and Persia (later Iran), and Imperial and Soviet Russia. She has worked extensively on Lord Curzon, ex-Viceroy of India and British Foreign Secretary and principal promoter of the 'Great Game' mindset and policy in South Asia. After her BA in History at the University of Aberdeen, and Diploma in the Russian language at the University of Glasgow, she obtained her MA and completed her PhD on 'Bolshevism, Islamism and Nationalism: Britain's Problems in South Asia' at Queen Mary University of London. She has taught at the School of History at QMUL, lectured on the Third Anglo-Afghan War (1919) at the Royal United Services Institute (RUSI) and contributed an impressive article, 'Facing the Wasps' Nest: on the Third Afghan War of 1919 and Afghanistan's Independence in History Today.