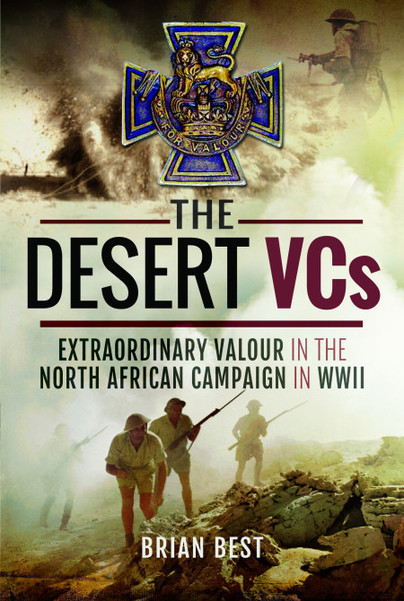 Extraordinary Valour in the North African Campaign in WWII

Click here for help on how to download our eBooks
Add to Basket
Add to Wishlist
You'll be £4.99 closer to your next £10.00 credit when you purchase The Desert VCs. What's this?
Need a currency converter? Check XE.com for live rates

It was not just the searing heat of the day, which was hot enough to boil an egg on the bonnet of a lorry, or the sand that nestled in every crevice of the body, or the shivering cold of the starlit nights, that the British and Commonwealth troops had to battle in the North African desert – it was also the tough and determined Axis forces, often under the command of their brilliant leader, Erwin Rommel.

The actions which resulted in the awarding of twenty-nine VCs in the Desert War included that of stretcher bearer Private Anderson walking alone into the gunfire of the enemy to rescue wounded comrades, not once, but time and time again until he too was shot and killed. Lieutenant George Gunn, who, at Sidi Rezegh, found his troop of the Royal Horse Artillery facing the onslaught of sixty German tanks. One by one the guns were put out of action, the crews killed or wounded. Eventually, only one gun was left, manned by the twenty-nine-year-old lieutenant and his sergeant. Regardless of the odds, Gunn fought on until he too was killed, shot through the head.

The fighting in North Africa was not just in the harsh extremes of the rolling desert, but also the barren mountains of Tunisia, and the coastal strips of Libya – though the author also examines a number of VC awards in related theatres and campaigns, such as Greece and in the surrounding waters and sky. In every battle, every manoeuvre, the terrain was the limiting or enabling feature – and it was over that unforgiving ground that twenty-nine men distinguished themselves and were awarded the highest of all gallantry medals, the Victoria Cross.

One of the most intriguing, and entertaining stories is about the struggles of John Kenneally, who was actually born to an unmarried mother and with a different surname. His story is probably worthy of a book all by itself.

... What is so hugely enjoyable about Best's book are details of the VC winners' lives and achievements before and after receiving the supreme honour for bravery in the face of enemy.

The result is a well-written, readable and inspiring book. Given the popularity of WWII in the wargames hobby at the moment, and the trend towards smaller actions, this is a most useful book of scenarios covering a wide variety of actions. If only there had been maps to accompany the descriptions it would have been outstanding. But even without maps this is a very good book which once opened is difficult to put down. Recommended.

NOTE: reviewed alongside The Forgotten VCs also by Brian Best