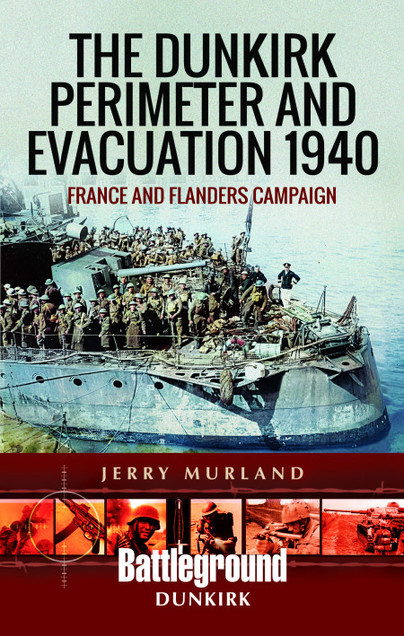 The Dunkirk Perimeter and Evacuation 1940 (Paperback)

Add to Basket
Add to Wishlist
You'll be £14.99 closer to your next £10.00 credit when you purchase The Dunkirk Perimeter and Evacuation 1940. What's this?
+£4.50 UK Delivery or free UK delivery if order is over £35
(click here for international delivery rates)

The book, the latest in a series of eight Battleground Europe books that deals with the BEF's campaign in France and Flanders in 1940, covers the fierce fighting around the Dunkerque Perimeter during May and June 1940 between the retreating British Expeditionary Force and its French allies and the advancing German army. It covers the area that most people in Britain associate with the fighting in France in 1940, a military disaster that could have been much worse. This grievous military setback was soon transformed into a morale boosting symbol of the resilience of the British against a Germany that had crushed so many nations in a matter of weeks.

With over 200 black and white photographs and fourteen maps, this book looks in some detail at the units deployed around Dunkerque and Nieuport and their often desperate actions to prevent the inevitable advance of German forces opposing them. The evacuation of the BEF from the beaches east of Dunkerque is covered in detail from the perspective of the Royal Navy and from the standpoint of the soldier on the beaches. Unusual for a Battleground Europe publication is the inclusion of a walk and drive around Ramsgate and Dover, covering the English end of the evacuation.

In addition to visits to the relevant cemeteries, the book includes three appendices and two car tours, one tour covering the whole of the Dunkirk perimeter and the other covering Ramsgate and Dover, although there is plenty of scope for walking in both tours. There is also a walk around De Panne, which takes the tourist along the beach that saw so much of the evacuation, and into the back areas of the town where the Germans left their mark when clearing up after the British had gone.

This is an excellent companion for anyone wishing to visit the Dunkirk area.

"The author manages to convey the story of a complicated situation with clarity and simplicity with a well-researched narrative generously sprinkled with personal memories that convey the realism of the time."

An interesting and well-documented work.

Jerry Murland provides a short introductory guide to the battle and evacuation in The Dunkirk Perimeter and Evacuation 1940, France and Flanders Campaign. A volume in Pen and Sword’s Battleground series, the book provides a good concise overview, complete with many illustrations and useful maps. Intended for battlefield visitors, Murland includes a suggested tour at Dunkirk that includes the Bastion 32 Museum, memorials, SS Princess Elizabeth, cemeteries, and shipwrecks as well as a tour of related sites at Ramsgate and Dover.

This is a good guide, both for the more sedentary types and those who want to get and be more active. It’s suitable both as a guide and as a good entry-level study of the campaign for those coming to it new. It’s good stuff all round.

An excellent book on the retrograde operations for Dunkirk in 1940. The Germans made a huge mistake by letting the British, French, and Belgium warriors escape by sea. This could have been a turning point in the war for the Germans. On the other hand, the Allied Forces did a masterful job of retreating to Dunkirk and the subsequent evacuation. This move saved hundreds of thousands of lives and allowed those same soldiers to live to fight another day.

Another addition to the Battleground series, and another from author Jerry Murland. This time looking at the story of the final stages of the defence of the perimeter and the final evacuation of the BEF and French units in the face of the German Blitzkrieg.
The first chapter provides the basic background story the had resulted with the formation of the perimeter and photos of many of the senior commanders of British, French and German armies. This also includes the impact of the famous Halt Order. The next chapter moves on to the make up of the perimeter, both French and British sectors, plus the decision to undertake Operation Dynamo.
Chapters 3-8 give well detailed coverage of The German Forces on the Perimeter: Defending the Perimeter-II Corps: Defending the Perimeter-III Corps: Defending the Perimeter-I Corps: Evacuation - The Logistics: Evacuation - The Reality. All of these are well illustrated throughout, not only with archive photos but also with plenty of maps, showing not only the general area situation, but others showing specific action details. It is also brought to life by the inclusion of snippets of personal recollections from a good mixture of veterans, those who were there and experienced the events first hand.
With all this background of the story ready to hand, it leaves chapter 9 to provide what I think is the heart of the book, the three tours it details. Two of these are for travel by car, and one for a walking tour. The first is for a trip around the Dunkirk Perimeter while the second is perhaps just that bit more unusual, as it is a tour in the UK, around relevant sites in Ramsgate and Dover. The walking tour is back to Belgium, a walk on the beaches at De Panne.
Dunkirk is an easy trip over the English Channel thanks to the Eurotunnel, so for the battlefield visitor all three tours would be relatively easy to make for the UK visitor, including the convenience of doing one of the tours here in Kent.

This is a remarkable story, well told, which even today lives in the national psyche. One quotation from Major Mark Henniker on the 4th June 1940 stands out ‘I suppose it will gradually dawn on the generous English people, who greeted us with food, socks, cigarettes and every sort of gift one could imagine, that it was no victory but a crashing defeat.’ I am not sure that that dawn has yet arrived.
The final chapter is a guide to the battlefields as they are now. These guides are so good that one almost doesn’t need to make the visit but for anyone who does do the trip this book is a must.
We highly recommend this well researched work.

This series of books "Battleground" stands out to provide the reader with a text full of information to know more about the theme. The dimensions are pocket-sized, but the number of pages (in this case 218) make it full of information, photos, descriptions of events and characters, maps that make it a very useful text to take with you to the place of those feats of arms.
In this case the evacuation of Dunkerque and Operation Dynamo, thanks to the stories of the protagonists and their testimonies of which the text is full, reveal the human as well as logistic and military aspect of this war feat. It is a book that I deeply appreciated and that I recommend to all readers.

The popular image of the tragic events at Dunkirk in 1940, is of long queues of soldiers chest deep in water, waiting for small craft to ferry them to larger vessels waiting off-shore. The evacuation marked the end of what was a military disaster. In the confusion of the moment, the last minute plan to rescue survivors of the British Expidionary Force, succeeded and over 300,000 men were evacuated. Books and films have all attempted to portray the story. In his book 'The Dunkirk Perimeter and evacuation 1940' Jerry Murland describes the ad hoc organisation on the mole and beaches,and personal stories of some of the men who were amongst last to leave the stricken city.

The story is the well supported by photographs and maps, with appendices listing large ships, those sunk, beached or abandoned together with dates. It also has a daily list the number of men rescued from both the beaches and the harbour between 26th May 4th June. A total 98,000 of the beaches and 239,446 from Dunkerque Harbour. An additional appendix gives the nationality of the ships which took part in the evacuation, which included French, Belgian, Dutch and Norwegian vessels, with the number of troops each evacuated. For family researchers and visitors to historic battle sites, the books lists the location of cemeteries and suggested walks of battle sites. 'Dunkirk Perimeter and Evacuation 1940' is part Jerry Murland's Battleground Europe Series on the France and Flanders Campaign 1940.

An excellent narrative of the actions around the Dunkirk perimeter. As is usual for this series it is supported by images, maps and the highly valued vignettes of battlefield stories. The suggested tours and walks are spot on. Recommended.