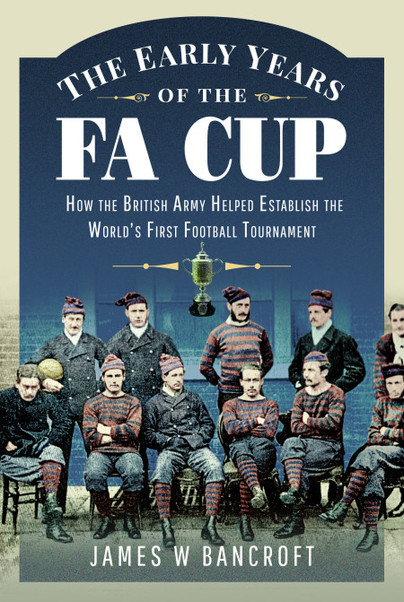 The Early Years of the FA Cup (Hardback)

Add to Basket
Add to Wishlist
You'll be £16.00 closer to your next £10.00 credit when you purchase The Early Years of the FA Cup. What's this?
+£4.50 UK Delivery or free UK delivery if order is over £35
(click here for international delivery rates)

The 150th anniversary of the first FA Cup competition, the earliest knockout tournament in the history of football, will be celebrated during the 2021-2022 season. The first set of matches was played on 11 November 1871, with the Engineers reaching the final played at Kennington Oval on 16 March 1872.

During the first decade of the competition three teams associated with the military, Royal Engineers, 1st Surrey Rifles and 105th Regiment, were involved in 74 matches. They won more than half of them and scored 154 goals. The Army also produced one of the most respected administrators in the history of football, in the form of Major Francis Marindin, who was involved in the founding of the FA Cup, played in two finals, and refereed a further nine.

Military men and units provided a number of ‘firsts’ in the early years of football. The Royal Engineers played in the first ever FA Cup final; Lieutenant James Prinsep of the Essex Regiment was the youngest footballer to appear in an FA Cup final until 2004, although he remains the youngest to complete a full match; Lieutenant William Maynard of the 1st Surrey Rifles played for England in the first ever official international match against Scotland; Captain William Kenyon-Slaney of the Grenadier Guards scored the first ever goal in an official international match, while playing for England; and Lieutenant Henry Renny-Tailyour of the Royal Engineers scored the first ever goal for Scotland in the same match.

At a time when there has been talk of a financially-motivated breakaway European Super League, James gives the reader the opportunity to look back at a time when football was played for the game itself. Using his vast knowledge concerning Victorian football and military history, The Early Years of the FA Cup explores the fascinating history of the Army’s involvement in the early years of the world’s most popular sport. With detailed descriptions of the finals and other matches involving the military teams during football’s heyday, this book, for the first time, then follows the men as they went on campaigns to build roads and bridges in hostile territory, provide maps for commanders in famous conflicts such as The Zulu War, Afghanistan, the Sudan, and the Boer Wars, and saw active service on the Western Front during the First World War. In some cases they never returned.

Often great footballers are referred to as ‘heroes’ – in the case of the men who played for the Army teams in the early FA Cup competitions, such an epithet is genuinely true.


As featured in: 'Chichester's link to first Cup Final

The Early Years of the FA Cup is an incredibly detailed account of the early days of the most famous trophy in world football. It is a brilliant account of some of the earliest pioneers of the beautiful game.
Brilliantly portrayed in fine detail with some astoundingly well-preserved photographs, it is a marvellous piece of literature. It is a fascinating insight into the heroes who played the game. How the teams were formed and managed.
The book gives the reader a running commentary of many of the early cup finals. Those who played, the scores and the managers. Even preliminary rounds are mentioned. It is all fascinating stuff.
I doubt that without the intervention of the army and especially the Royal Engineers, the Football Association Cup may never have been the success as we know it today.
The FA Cup has been a staple of my diet since the early sixties. I have had the privilege of being there twice. The occasion is unbelievable and is a far cry from the 1870s. But we should never forget where it all started.
I highly recommend this book, and every football fan should read it.