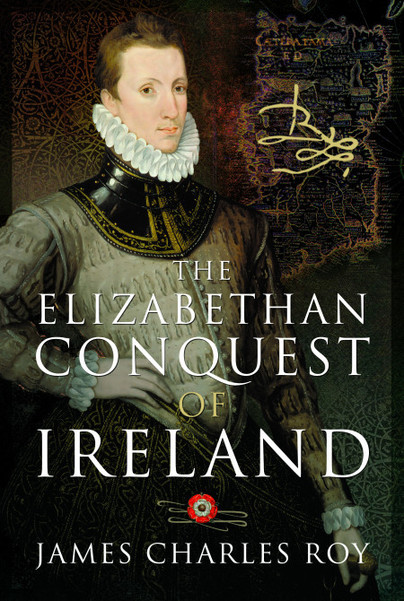 The Elizabethan Conquest of Ireland (ePub)

Click here for help on how to download our eBooks
Add to Basket
Add to Wishlist
You'll be £4.99 closer to your next £10.00 credit when you purchase The Elizabethan Conquest of Ireland. What's this?
Need a currency converter? Check XE.com for live rates

“James Charles Roy invariably takes an original, challenging and creatively oblique view of Irish history, and his study of the Elizabethan regime’s attempts to subdue the country is no exception. The Elizabethan Conquest of Ireland surveys and explores not only the catalogue of war, conquest and attempted settlement, and the campaign of Elizabethan soldiers and statesmen to create (or suborn) a local aristocracy; the book also focuses on the intellectual efforts of Englishmen to come to terms with a country which they variously depicted as exotic, seductive, savage, irreconcilable and religiously subversive. Roy’s book both delineates the tortuous and often brutal story of English rule in Ireland during this transformative era; it also traces out themes (religious, intellectual and psychological) which would characterize the tangled relationship between the two countries for the ensuing centuries. It is a richly-textured, impressively researched and powerfully involving story, written with a full realization of its tragic and haunting relevance for future times”. -Roy Foster, author of Modern Ireland, 1600-1972, among several titles.

“Excellent at creating atmosphere while developing a fast narrative. The author is up-to-date with the most recent scholarship, and quotes extensively from primary sources. A pleasure”. -Nicholas Canny, author of Making Ireland British: 1580-1650, among other titles.

“James Charles Roy is remarkable for his wide intellectual range, erudition, penetrating analysis, capacity for sustained research, and deep familiarity with sources relating to Elizabethan Ireland. His book will add significantly to scholarship in a field already served by so many outstanding scholars”. - David Fitzpatrick, author of The Two Irelands, and other titles.

“This narrative exposes not only the ineptitude of the people behind negotiating and treaty-making, but also on a queen unable to focus her mind. Whereas many histories emphasize one side of Elizabeth as a canny and masterful monarch, The Elizabethan Conquest of Ireland presents her as a woman whose romantic misadventures interfere with her duties and whose lack of interest in—and commitment to—Ireland leads to extremes of vio lence on both sides. This reader was riveted”. - Dr. Laurie Kaplan, Academic Director, George Washington University’s London Center.

The relationship between England and Ireland has been marked by turmoil ever since the 5th century, when Irish raiders kidnapped St. Patrick. Perhaps the most consequential chapter in this saga was the subjugation of the island during the 16th century, and particularly efforts associated with the long reign of Queen Elizabeth I, the reverberations of which remain unsettled even today. This is the story of that ‘First British Empire’.

The saga of the Elizabethan conquest has rarely received the attention it deserves, long overshadowed by more ‘glamorous’ events that challenged the queen, most especially those involving Catholic Spain and France, superpowers with vastly more resources than Protestant England. Ireland was viewed as a peripheral theatre, a haven for Catholic heretics and a potential ‘back door’ for foreign invasions. Lord deputies sent by the queen were tormented by such fears, and reacted with an iron hand. Their cadres of subordinates, including poets and writers as gifted as Philip Sidney, Edmund Spenser, and Walter Raleigh, were all corrupted in the process, their humanist values disfigured by the realities of Irish life as they encountered them through the lens of conquest and appropriation.

These men considered the future of Ireland to be an extension of the British state, as seen in the ‘salon’ at Bryskett’s Cottage, outside Dublin, where guests met to pore over the ‘Irish Question’. But such deliberations were rewarded by no final triumph, only debilitating warfare that stretched the entire length of Elizabeth’s rule. This is the story of revolt, suppression, atrocities and genocide, and ends with an ailing, dispirited queen facing internal convulsions and an empty treasury. Her death saw the end of the Tudor dynasty, marked not by victory over the great enemy Spain, but by ungovernable Ireland – the first colonial ‘failed state’.


Philip Sydney, Humphrey Gilbert, Walter Raleigh, Edmund Spenser, the Earl of Essex, Frances Walsingham and many other illustrious Elizabethans whom most of us know about, all spent part of their careers in Ireland, of which most of us know little. The historians and novelists who write about such celebrities usually pay scant attention to this part of their lives, regarding Ireland as a distraction from more interesting events, as indeed did the Queen herself.

Roy's scholarly and magisterial work gives us the Irish dimension in full and much more. Perhaps the only criticism is that most of it is not about Ireland. Although Roy is an Irish-American scholar this is a surprisingly Anglo-centric book which also finds space to deal with France and Spain. The capture of Cadiz takes as much space as the battle of Kinsale. The entire Elizabethan Age is here, even a critique of the Fairie Queen, which is a bonus since Roy writes with a caustic wit which does not spare the savagery and ineptitude of so many of our Elizabethan heroes.

Now this subject is not my expertise, I’m just always willing to learn more about history, but this seems a fascinating book and well written by the author James Charles Roy, the story to me seems very well balanced and relies a lot on letters. The book reads at a good pace and is well-paced with lots of different people and events to try and keep up with. I would say that this book is certainly for the people who already have a bit of knowledge about the Elizabethan era, mainly because this will then help with all the different interactions and relationships with various people. A good book, well written and one to recommend.

Highlight: 'It is amazing to see how Roy keeps a hold of hundreds of names and personages and how he weaves together events to provide a coherent, fast-moving, breathtaking tale.'

Book review highlight: 'It is amazing to see how [Roy] keeps a hold of hundreds of names and personages and how he weaves together events to provide a coherent, fast-moving, breath-taking tale.'

The author unravels the contributions of the many individuals who contributed to the Elizabethan conquest of Ireland and builds a very clear idea of how those characters were connected using many primary sources. It throws light on one of the earliest aspects of imperialism.

JAMES CHARLES ROY is an independent scholar with an international reputation as an expert in Irish history. He is a well-known member of the Irish-American academic community, and also a former editorial contributor and American representative of the Journal of the Galway Archaeological & Historical Society, co-founded by Lady Gregory in 1900. A prolific author of books and articles on history and travel, he has been published by leading imprints in the US, Ireland and Germany. Also a gifted photographer, his work has been exhibited at the Boston Public Library, the National Library of Ireland and numerous other venues.