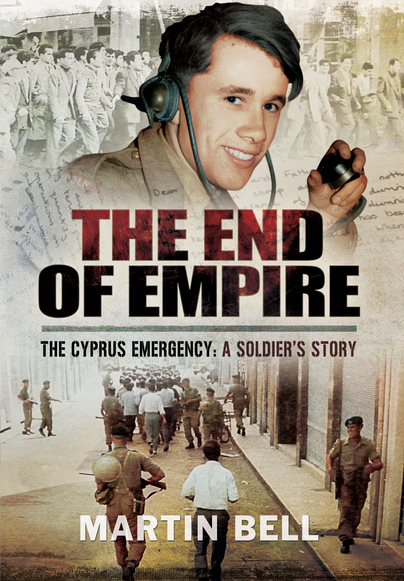 The End of Empire (Hardback)

The Cyprus Emergency: A Soldier's Story

Martin Bell, the former BBC war reporter and Independent MP, served as a soldier in the Suffolk Regiment during the Cyprus emergency between 1957 and 1959. In a chocolate box in the attic many years later he found more than 100 letters that he had sent home to his family. He was not a journalist then, but the letters give a vivid impression of what it was like to be a conscript on active service during the EOKA rebellion against British rule. They describe road blocks and cordons and searches, murders and explosions and riots – and a strategy of armed repression that ultimately failed. From this beginning he has written The End of Empire.

His narrative is a powerful and personal account of the violent process of decolonization, of the character of the British Army at the time and the impact of National Service on young men who were not much more than 'kids in uniform'. It also gives a graphic insight into the ultimate futility of the use of force in wars among people and it reveals the true story of the insurgency and the campaign to defeat it.

By drawing on recently declassified documents, he shows that Cyprus in the late 1950s was run not by the governor but by a military junta. The army commanders were looking for the knockout blow that would deliver victory, but their misguided tactics served only to strengthen support for their enemy.

So The End Of Empire is much more than a personal reminiscence. It is an absorbing account of the experience of army life from the perspective of a private soldier, and it is the inside story of how Britain tried to crush a violent rebellion sixty years ago.

Article: 'The sage of Suffolk' as featured by

Learning from failure is the most valuable lesson of history, which is why Martin Bell’s personal reminiscence about the Cyprus Emergency makes for vital reading. Bell is a famous war reporter and politician but his first experience of conflict was during his years as a teenage national serviceman on Cyprus during the late 1950s. The Cyprus Emergency was part of a series of controversial British military operations during this period that included the Suez Crisis, Mau Mau Uprising and Aden Emergency. These small conflicts were visible signs of Britain’s imperial decline, and Bell’s fight against EOKA in Cyprus was a typical experience for conscripted national servicemen.

End Of Empire is a vivid account of Bell’s active service, which is based on over 100 letters that he sent home to his family from Cyprus. It is a war story not of battles but of roadblocks, explosions, riots and murders. It was in this toxic environment that Bell first experienced war, and he is noticeably outspoken about the misguided tactics of the British Army to defeat a guerrilla insurgency.

Like the professional journalist he is, Bell does not just relate his own experiences but has thoroughly researched declassified documents. As such, the book reveals how the British failed on Cyprus, but Bell is also fair about the merits of individual commanders and soldiers on both sides. Throughout End Of Empire, Bell is strikingly honest about both himself and the times through which he lived. In one particular confession, he reveals the casual racism that existed in the British mentality and even quotes his own letters home, where he made derogatory comments. Bell admirably makes no excuses for himself (or anyone else) and admits, “If there were a way of disowning one’s younger self I would most cheerfully do so.” The book is full of these naked truths, and not just about the young Bell. He learned lessons from the Cyprus Emergency and argues that we all should too. After all, this forgotten conflict claimed more British lives than either the Falklands or Iraq wars and hastened the ethnic divisions that still trouble Cyprus today.

At the same time End Of Empire is also a witty insight into life as a national serviceman, and Bell’s wry observations about the British Army appear throughout the book. Nevertheless, despite his damning conclusions, Bell remains proud of his service, and in many ways this unique war memoir is a compelling story of how a now-obscure conflict was the making of him.

The author, well known for many years as the BBC's reporter from war zones and emergencies, later as an independent MP, served with the Suffolk Regiment in Cyprus while on National Service 1957 to 1959. Many years later, the discovery in an attic of over a hundred letters he had sent home to his family resulted in this book, a narrative of the last two years of the Suffolk Regiment, for as the author says 'shortly after my demob it marched off parade and was gone forever' at the same time the story of the insurgency and the campaign to defeat it. While on a personal front the author says how National Service 'changed me completely and did me some good. It was the best education I ever had' a sentiment with which this reviewer of this most readable book concurs.

A fascinating tale that is based on letters the author wrote home to his family during his National Service with the Suffolk Regiment in the 1950s...

He paints a vivid portrait of life in the British Army of sixty years ago and provides an inside story of operations against EOKA rebels in Cyprus, drawing on classified documents to reveal the true story. It is a fascinating read and may surprise many readers who thought they knew the true story of the period and the events.

The text is polished, as can be expected of a professional wordsmith, and the photo-plate section contains images that are not familiar from frequent reproduction.

On a personal front the author says how National Service 'changed me completely and did me some good. It was the best education I ever had' a sentiment with which this reviewer of this most readable of books concurs.

Martin Bell's account gains added force by his campaign, using the Freedom of Information Act, to secure the release to the public in 2014 of an account of the Emergency called "Flaming Cassock" written by Lieut. Col. Arthur Campbell, at the request of the Governor of the time, Sir John Harding. The Colonial Office and Harding's successor as Governor, Sir Hugh Foot had suppressed the account. It contains some remarkable revelations about the true state of the security forces in Cyprus at the time as well as some less than complimentary remarks about the Archbishop. Martin Bell's book is a valuable addition to Britain's history of decolonisation.

Martin Bell was called up to basic training at Gibraltar Barracks in Bury St Edmunds in June 1957, then served in Cyprus from October 1957 to May 1959. He was sore about failing the War Office Selection Board and felt he had let himself down. The book contains many excerpts from the letters, some of which puzzle the writer some 50 years later. Largely serving in the intelligence section, Bell describes patrols to hillside villages and Nicosia, riot control, listening to radio traffic, creating maps, guard duties, long nights in Central Police Station etc. Camp life in summer dust or winter rain led a lifelong dislike of tents. Naturally, entertainment, football, even a spelling competition were more popular aspects of life. There are explanations of history, including Operation Matchbox, informative but not intrusive. His recollections of his regiment are warm, and obviously played a part in his understanding of soldiers' experiences in his later career as a war reporter in Vietnam, Middle East, Nigeria, Angola, Northern Ireland and Yugoslavia. One chapter deals with his thoughts on media coverage of military and emergency matters – interesting in view of later work. There are unexpected tales, such as a few days leave in Tel Aviv. Several chapters recount the background to the suppression of “Flaming Cassock”, written by Lieutenant Colonel Arthur Campbell. Bell obviously admires the officer, and hopes the book will be declassified and published.

In summary, a book about national service and a specific period of history and how these affected the life of the author. Well written, satisfying to read, with appeal to readers beyond those who shared similar experiences.

The book shares Bell's experiences as a young soldier serving out his National Service with the Suffolk Regiment, during a volatile period of British post-war military history. Based upon letters he wrote home and recent declassified documents from the period, the book explores the daily happenings of the Cyprus Emergency from a Soldier's perspective and the length taken by those in command to squash the insurgency,

I found Martin’s account of his time in Cyprus very interesting and could visualise the way in which the young men doing their national service settled in (or not) to the role of a soldier in a country maybe they had never previously heard of. The book is a soldier’s account of the Cyprus emergency and gives an insight to the ultimate partition of the island which still exists today, 41 years later... For those who are interested in military history, especially that of Cyprus, this is a really good read.