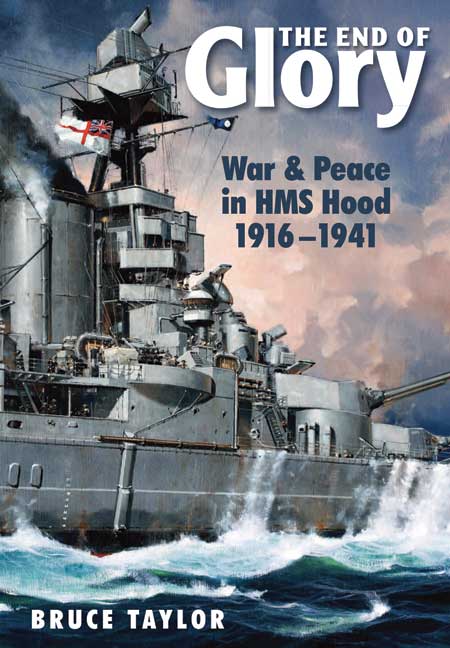 The End of Glory (Kindle)

Click here for help on how to download our eBooks
Add to Basket
Add to Wishlist
You'll be £8.00 closer to your next £10.00 credit when you purchase The End of Glory. What's this?
Need a currency converter? Check XE.com for live rates

There have been many fine books written on HMS Hood, the glory of the Royal Navy, while television and cinema have also taken the subject to their heart. No book, however, has ever offered the combination of in-depth research and thrilling narrative to be found in The End of Glory.

For twenty years Hood symbolised the Royal Navy during the twilight years of the British Empire before, in 1941, being destroyed in seconds by the battleship Bismarck, a catastrophe that shattered the morale the British public. For those who manned her, however, she was both a home and a fighting platform, and this new book, through official documents as well as the personal accounts and reminiscences of more than 150 crewmen, offers a vivid image of the face of naval life and the face of naval battle.

A brilliant behind-the scenes exposé of a warship in peace and war, it not only paints an intimate picture of everyday life but deals with any number of controversial issues such as the Invergordon mutiny, escapades ashore and afloat, the Christmas mutiny of 1940 and the terrible conditions onboard in war.

This coverage, based on so many original sources, makes for a truly compelling story which neither historian, enthusiast nor general reader will find easy to put down.

No book has ever offered the combination of in-depth research and thrilling narrative to be found in this volume.

A excellent book regarding one of Great Britain's most famous warships.

Written by the author of a major reference work on the Hood, whilst this book is purposely more of a social history than a technical history, it is a wonderful insight into life onboard the “Mighty HOOD”.

The account of her last action with Bismark on 24th May 1941 includes eye witness accounts, recounting the ineffectiveness of HOOD's own main armament in the opening salvos and the massive explosion that tore through her after section and her swift loss.

This is a remarkable work that complements Bruce Taylor's earlier work on HMS Hood and gives insight into the lives, hopes and aspirations of those who served in her. I can honestly say there were large passages I couldn't put down and I have no hesitation in recommending this book strongly to anyone with an interest in naval history in general and a remarkable ship in particular.

The End of Glory is a very welcome addition to the Hood story. It is beautifully written and brings both the men and the machine vividly to life. If your looking for a single volume on the ship, her life and death, this is it.

This book looks at one of the most infamous British Warships of the Second World War, HMS Hood. Over the years there have been many books written on the Hood, many focusing on her construction, naval history or her sad demise at the hand of the German pocket battleship Bismark. But this book takes a different slant in that it deals more with those who crewed her and the daily life onboard.

Using official documents and the personal accounts and reminiscence of more than 150 crewmen, the book offers a vivid image of the life onboard HMS Hood in peace and war, and deals with more controversial issues such as the Invergordon mutiny, escapades ashore and afloat.

Much has been written about the Hood and there has been good film and television coverage of parts of her story. Most accounts had concentrated heavily on the unequal fight with the Bismark. The author has produced a completely new approach, combining detailed research and thrilling narrative through the history of the Hood to her eventual sinking. This includes contributions from 150 former crewmen.

The author has presented a story that grasps the reader and provides a rewarding picture of the life and times of this tragic warship. A black and white plate section adds good illustrative support from building to sinking. Hood was perhaps an appropriate symbol during the closing years of British Empire, appearing more than she really was but fitting well with the ceremonial of Empire.

Taylor has written an excellent and very readable account to bring this tragic story to a new generation.
The contrast between the veneration she commanded in peacetime and the brutal, dramatic, and complete end to her story continues to fascinate. And, if anything, knowing that things turned out badly makes Taylor's narrative,which translates metal and machinery into human experience, all the more gripping.