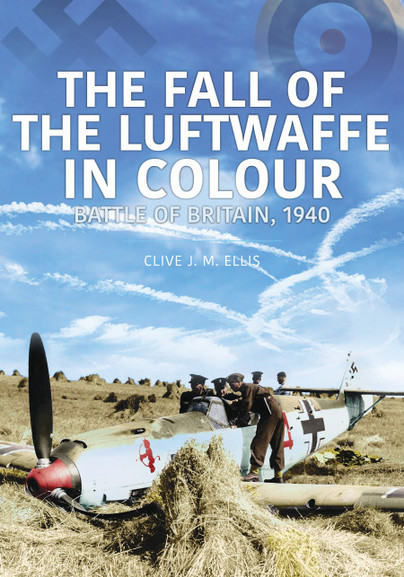 The Fall of the Luftwaffe in Colour (Paperback)

Add to Basket
Add to Wishlist
You'll be £12.79 closer to your next £10.00 credit when you purchase The Fall of the Luftwaffe in Colour. What's this?
+£4.50 UK Delivery or free UK delivery if order is over £35
(click here for international delivery rates)

Meticulously researched over the course of 20 years, this colour rendition of the Luftwaffe’s Eagles in defeat accurately portrays the stark reality of the desperate days in 1940 when Britain stood alone. Using an extraordinary combination of stunning colourised images and extensively researched text, this book gives a new and different perspective on the battle between ‘the few’ and Hitler’s vaunted Luftwaffe. It contains some 200 photographs of downed enemy aircraft, painstakingly colourised today, showing the rare spectacle of newcolour from the Battle of Britain period.

More than 50 years ago, Clive Ellis first viewed the 1969 epic film Battle of Britain on the big screen. Initially awestruck, inspired, then subsequently fascinated by those intense aerial battle scenes, he has been consumed by reaesrch into the Battle of Britain ever since. Along the way, a chance meeting with Eddie Creek of Chevron/Classic Publications during 1999 culminated in assisting with the Jagdwaffe (Luftwaffe Colours) series on the subject in 2000. From then on, he has contributed material in support of various book projects and magazine articles. Outside his research at the National Archives at Kew, he is particularly interested in finding the actual crash sites where aircraft from both sides came down and also in establishing exactly what happened to the various pilots and aircrew involved, finding out their names and details of where they came from.