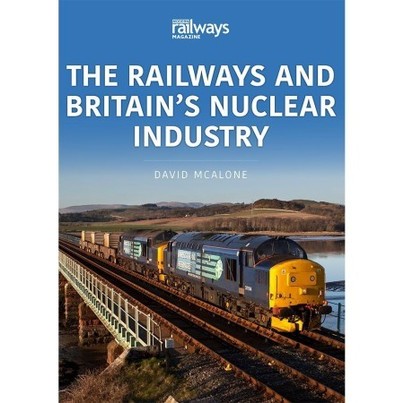 Add to Basket
Add to Wishlist
You'll be £11.99 closer to your next £10.00 credit when you purchase The Railways and Britain's Nuclear Industry. What's this?
+£4.50 UK Delivery or free UK delivery if order is over £35
(click here for international delivery rates)

This book shows the important role played by the nation’s railways in the nuclear industry and how the need to secure that service through the turbulence of privatisation led to the creation of the nation’s most diverse railway company, Direct Rail Services.

1945 marked the beginning of the Labour government that would nationalise the railways and witnessed the start of British nuclear weapon development, which led to a civil nuclear industry. By the 1990s both industries were heading for privatisation, though neither would truly be free from government control. This book provides a brief history of British nuclear power and technology, and goes on to illustrate the transport of spent nuclear fuel from around the world to the Sellafield reprocessing plant.

In the twenty-first century the decommissioning of reactors and defence establishments across England added to the loads travelling by rail to the national Low Level Waste Repository. The railways also transported chemicals for the nuclear industry, construction materials and – at least in part – the industry’s workers too. Direct Rail Services took over this traffic and became a major player in the rail freight business, with a significant role in the nation’s passenger market. The book illustrates this transformation and explains why it happens.

The book contains around 150 photographs, of which at least 100 are in Cumbrian locations. But it is more than just a book of photographs. The pictures complement the narrative, illustrating the information as it unfolds. This would be a good addition to any library of Cumbrian railway books, and is a book that can be read through to explain the development of nuclear freight or dipped into at random to enjoy the excellent photographs.

An excellent compendium of the history of the transport of nuclear material. Excellent photographs as well as informative text.