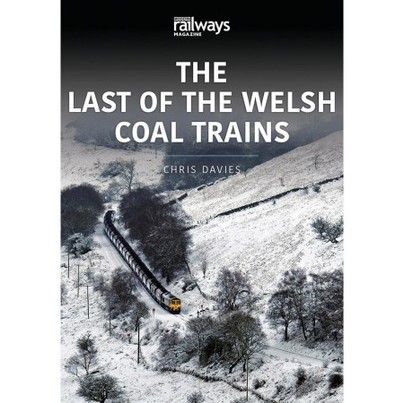 The Last of the Welsh Coal Trains (Paperback)

Add to Basket
Add to Wishlist
You'll be £11.99 closer to your next £10.00 credit when you purchase The Last of the Welsh Coal Trains. What's this?
+£4.50 UK Delivery or free UK delivery if order is over £35
(click here for international delivery rates)

Order within the next 3 hours, 57 minutes to get your order processed the next working day!

Despite the substantial decline of coal mining in the UK over the last three decades, until recently, coal was still a vital energy source for the nation’s power stations. During 2013 and 2014, coal accounted for 36 per cent of all UK rail freight, but that amount plummeted in 2015 due to the doubling of the top-up carbon tax, a measure implemented to encourage power stations to use greener fuels. With the government’s phase-out of all coal-fired power stations by 2025, many have already closed.

South Wales is one of the last places in the UK where coal is still mined and despatched by rail for domestic consumption. Aberthaw power station was the principal customer for this coal until 2017, when they turned to imported coal. This measure was taken to reduce toxic nitrogen emissions at the plant and was the beginning of the end for the power station, which finally closed in late 2019.

Coal is still mined in South Wales and is supplied by rail to Tata steel in Port Talbot, to British Steel’s Scunthorpe works, to Breedon cement works in Derbyshire and to Immingham for export. However, the future of the industry remains uncertain as we move away from fossil fuels towards more eco-friendly forms of energy.

This book looks at the last of the coaling operations in South Wales, from 2013 to early 2020, and features over 190 colour images of coal trains running to and from the mine sites along the scenic South Wales Valleys and the picturesque stretch of coastline that the Vale of Glamorgan line takes to Aberthaw.

Chris Davies has been interested in railways since he was a little boy and is old enough to just about remember the last of the steam engines in action, mainly shunting at Barry in South Wales. He grew up in South Wales and read geology at Aberystwyth University. After graduating, he worked as a professional geologist in many parts of the world, including Africa, Australia, Yemen, Indonesia and Eastern Europe. He moved back to the UK in the late 1990s when he became a Director of a London-based exploration company with projects in Africa.

He has a keen interest in photography, and it is only in recent years, now that he is semi-retired, that he has started photographing railways seriously. He has mainly focussed on capturing the railways in South Wales but has also been to many other parts of the UK in pursuit of his hobby. He has also made two visits to China in recent years to photograph the last of the world’s steam engines. He is married to Claire and lives in South Wales.