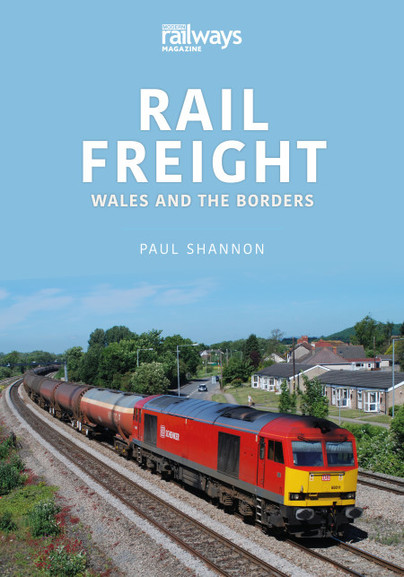 Wales and the Borders

Preorder
Add to Wishlist
You'll be £10.49 closer to your next £10.00 credit when you purchase Rail Freight. What's this?
+£4.50 UK Delivery or free UK delivery if order is over £35
(click here for international delivery rates)

The changes to rail freight in Wales and the Borders since the 1980s have been dramatic in many ways and have often been a knock-on effect of huge transformations in the industries that the railway serves, most notably, the coal-mining sector. These have led to a railway with a slimmed-down infrastructure and renewed traction and rolling-stock fleets.

Until the 1980s, coal was still the lifeblood of many railway lines in South Wales. However, one by one, the pits closed, leaving just a handful of surface operations still active in 2020. The sight and sound of a Class 37 winding its way up a steep-sided valley is now a distant memory. Industrial decline has affected other traffics too, with the loss of the heavy iron ore trains to Llanwern and many other flows. However, Welsh rail freight is far from dead. Class 60-hauled oil and steel trains still ply the South Wales main line, and there have even been small revivals such as cement from Penyffordd.

Illustrated with over 150 stunning photographs, many of which are previously unpublished, this volume looks at the changing face of rail freight in Wales and the Borders, detailing the changes in traction, rolling stock and railway infrastructure over four decades.

Paul's love of railways was triggered by taking the train to school in 1970. He developed a keen interest in rail freight and travelled widely to record the changing railway scene from the late 1970s onwards. He is the author or compiler of around 50 books, mainly covering different aspects of rail freight but also some general titles on railway history and infrastructure. He has also contributed more than 100 articles to enthusiast magazines and written around 40 DVD scripts, some covering railway operations in mainland Europe.