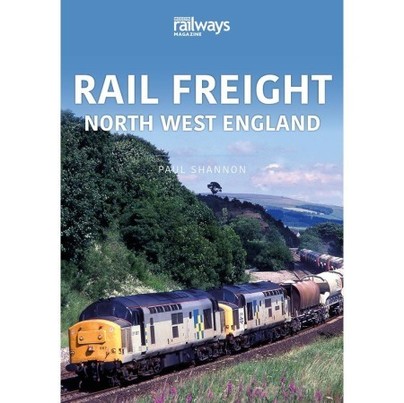 Add to Basket
Add to Wishlist
You'll be £11.99 closer to your next £10.00 credit when you purchase Rail Freight. What's this?
+£4.50 UK Delivery or free UK delivery if order is over £35
(click here for international delivery rates)

This book illustrates the changing face of rail freight in North West England over 40 years. During that time the traction and wagon fleets have been almost completely replaced, freight trains have become heavier and less frequent, the amount of shunting and trip working has been dramatically reduced, and most small freight terminals have closed.

Perhaps the most striking loss has been freight from the oil and chemicals complex around Ellesmere Port and Stanlow and the former ICI complex around Northwich has lost almost all its rail traffic. On the Cumbrian coast, just nuclear traffic remains after the loss of coal, steel and chemicals traffic. However, not all the change has been negative: we now have biomass on rail, increased intermodal traffic and significant growth in stone traffic from the Buxton area.

Illustrated with over 150 stunning photographs, many of which are previously unpublished, this volume looks at the evolution of rail freight in specific localities, detailing the changes in traction, rolling stock and railway infrastructure over four decades.

Paul's love of railways was triggered by taking the train to school in 1970. He developed a keen interest in rail freight and travelled widely to record the changing railway scene from the late 1970s onwards. He is the author or compiler of around 50 books, mainly covering different aspects of rail freight but also some general titles on railway history and infrastructure. He has also contributed more than 100 articles to enthusiast magazines and written around 40 DVD scripts, some covering railway operations in mainland Europe.