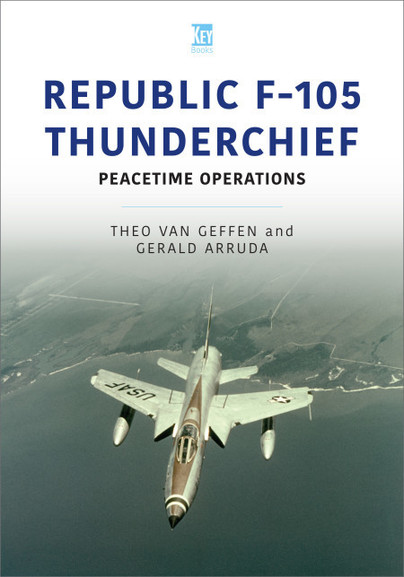 Preorder
Add to Wishlist
You'll be £12.79 closer to your next £10.00 credit when you purchase Republic F-105 Thunderchief. What's this?
+£4.50 UK Delivery or free UK delivery if order is over £35
(click here for international delivery rates)

The F-105 Thunderchief was primarily designed for tactical nuclear operations. For this reason, it was on nuclear “Victor” alert in Europe (Bitburg and Spangdahlem Air Bases in Germany) and the Far East (Kadena on Okinawa and Osan in the Republic of Korea). After President John F. Kennedy took office in January 1961, his Secretary of Defense, Robert McNamara, shifted the USAF’s focus more and more to conventional warfare including, through modifications, the mission of the F-105. When the air war against North Vietnam was initiated in earnest on March 2, 1965, the USAF needed an aircraft with a load-carrying ability, and the only aircraft that could do that job was the Thunderchief. This book not only gives in-depth accounts of various historical F-105 events, with inputs from the pilots involved, but is also lavishly illustrated with over 150 images, many of which have never been published before.

Theo van Geffen has been an aviation journalist and historian since 1977. He is from Utrecht, the Netherlands. His focus is the history of the F-105 Thunderchief and the units it flew with, and of the Air War in Southeast Asia. His articles/photos have been published in British, Dutch, French, Japanese and US aviation magazines. A present article project is the Gulf War in three increments for Air Power History, the official publication for the (US) Air Force Historical Foundation.