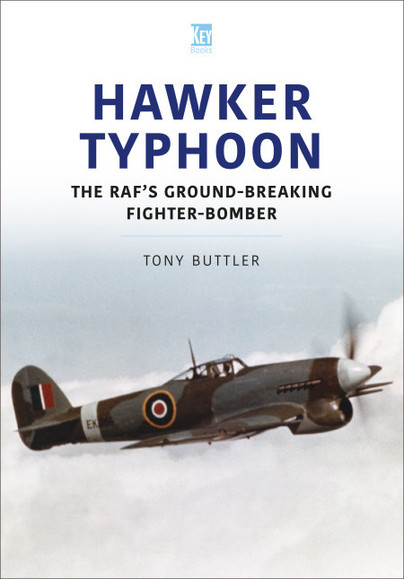 Preorder
Add to Wishlist
You'll be £12.79 closer to your next £10.00 credit when you purchase Hawker Typhoon. What's this?
+£4.50 UK Delivery or free UK delivery if order is over £35
(click here for international delivery rates)

Although first designed as a fighter, during the fighting in and over Europe during 1944 and 1945 the Hawker Typhoon gained a tremendous reputation and true fame as a ground-attack aircraft and tank-buster. This was a remarkable achievement because, during its development and early career, the Typhoon had experienced severe problems with its Napier Sabre engine and catastrophic failures of its airframe.

The Typhoon’s offensive ground-attack work is well known, but that tends to overshadow the type’s successes operating from 1942 as a true fighter based in the UK. Nevertheless, during the final year of World War Two, following the D-Day landings in June 1944, the Typhoon performed a crucial role in the European theatre. After May 1945 it disappeared from RAF squadrons very quickly, so to leave such a record of success over such a short time is nothing short of outstanding! It was not a world-beater, but the Typhoon was perfect for the job that was required of it. Many books that document the Typhoon cover it in conjunction with its successor, the Hawker Tempest. However, this work, fully illustrated with over 180 photographs, gives this heavyweight machine a well-deserved volume of its own.

A resident of Worcestershire in the centre of England, Tony Buttler worked for 20 years as a metallurgist at High Duty Alloys (part of Hawker Siddeley) where he analysed and tested aluminium and titanium forgings manufactured for the aircraft and defence industries. It was here that his deep interest in military aircraft grew, particularly in regard to their design and development. In 1994, he took a master’s degree in Information Science and Archives at Loughborough University, and since 1995 he has been a full-time aviation historian and author. So far, he has written 40 major books, numerous titles in the Warpaint series of modeller’s books and several hundred articles for historical aviation magazines. He also presents lectures to the Royal Aeronautical Society and other groups, and in 2017 he became a member of the Society’s Historical Group Committee. His archive and photo collections embrace British, French and US combat aircraft types from the mid-1930s until the 1980s.