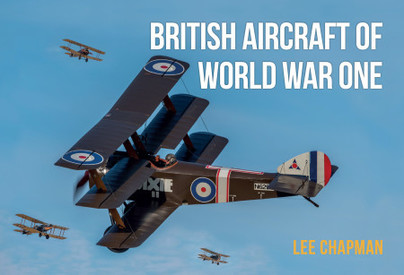 A Photographic Guide to Modern Survivors, Replicas and Reproductions

Preorder
Add to Wishlist
You'll be £14.39 closer to your next £10.00 credit when you purchase British Aircraft of World War One. What's this?
+£4.50 UK Delivery or free UK delivery if order is over £35
(click here for international delivery rates)

World War One took place just after the birth of powered flight, when aerial technology was still in its infancy. At the outbreak of war, the military potential of this novelty invention was not fully recognised until commanders began to use the aeroplane to see what the enemy was planning on the other side of the hill. During the course of the war, the role of the aeroplane evolved from a stable, lumbering observation platform to a more agile fighter, capable of shooting down another aircraft. In a bid to out-do the enemy, the ongoing arms race saw rapid developments in aeroplane technology, which led to an incredible array of ever-advancing aircraft seeing service during this time.

This book features a potted history of the British aircraft that were involved in World War One. It includes the frontline fighters, bombers and reconnaissance aircraft that contributed to the iconic events between 1914 and 1918. The story is supported by high-quality images of surviving, reproduction, replica and restored aircraft.