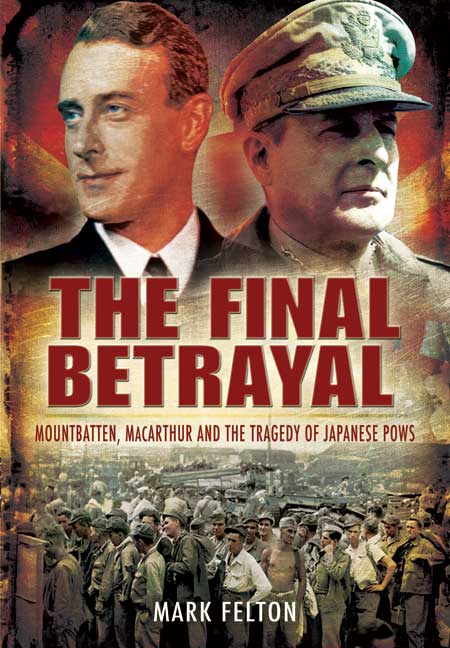 MacArthur and the Tragedy of Japanese POWs

Click here for help on how to download our eBooks
Add to Basket
Add to Wishlist
You'll be £4.99 closer to your next £10.00 credit when you purchase The Final Betrayal. What's this?
Need a currency converter? Check XE.com for live rates

This book examines the period between the unconditional surrender of Japan on 14 August 1945 and the arrival of Allied liberation forces in Japanese-occupied territories after 2 September 1945.

The delay handed the Japanese a golden opportunity to set their house in order before Allied war crimes investigators arrived. After 14 August groups of Allied POWs were brutally murdered. Vast amounts of documentation concerning crimes were burned ahead of the arrival of Allied forces. POW facilities and medical experimentation installations were either abandoned or destroyed. Perhaps the greatest crimes were continuing deaths of Allied POWs from starvation, disease and ill-treatment after the Japanese surrender.

The blame rests with the American authorities, and particularly General MacArthur, Supreme Allied Commander in the Pacific. MacArthur expressly forbade any Allied forces from liberating Japanese occupied territories before he had personally taken the formal Japanese surrender aboard the USS Missouri in Tokyo Bay on 2 September 1945. Vice Admiral Lord Mountbatten, Commanding Allied forces in Southeast Asia, protested against this policy, believing that pandering to MacArthur’s vanity and ego would mean condemning many starving and sick prisoners to death. Deaths among British and Commonwealth POWs were significant as opposed to American POWs who were already largely liberated in the Philippines and elsewhere.

MacArthur’s and the American leadership’s obsession with sidelining the British in Asia cost hundreds of British and Commonwealth lives, hundreds and hundreds of lives, that otherwise would have been saved if Mountbatten had been permitted to proceed with his liberation plans.

The Final Betrayal by Mark Felton
by Auld-Yin
Rate this article
Number of Views: 369 0 Comments
1945 and the war in Europe is over and the war in the Far East is drawing to a closure. Mark Felton brings us a book which details the little known delay between the fighting ending and the arrival of Allied forces to release the PoWs, many of whom had been held by the Japanese since 1942. The book takes us through the politics of the era, the ascendancy of the United States and diminishing of the British Empire. Decisions were made which meant the lives of thousands of Allied PoWs, mainly British and Commonwealth.

The book also details the depths of depravity that the Japanese sank to during this period, including officially sanctioned cannibalism.


The two main characters on the Allied side were Mountbatten and MacArthur with side characters of Blamey for the Australians. Felton has little time for Blamey, accusing and demonstrating how he was so far up MacArthur’s arrse that he actually cost Australian lives needlessly in order to keep himself in favour at MacArthur’s HQ. The main thrust of the book is how MacArthur’s orders to the Allies not to take any Japanese surrender until after he had received the main Japanese surrender in Tokyo Bay. This delayed by over two weeks the relief of the PoW camps and the deaths of thousands of Allied PoWs. The Japanese had a policy of getting rid of all evidence of war crimes and part of that was disposing of PoWs. It is difficult to imagine how they thought that killing thousands of PoWs would hide the matter, but that was the Japanese mindset. This is demonstrated by a Death March in Borneo where thousands of British, Australian and Indian PoWs had been held in work camps. Tales of how the Indian PoWs were taken into the jungle and beheaded while the 'white' prisoners were marched inland along almost non-existent jungle tracks, on virtually no rations with a specific intention that none, or very few should reach the destination. All this was known to the Allies through the Special Operatives Asia (SOA) operatives in country sending back reports of camps and their condition.

Felton takes us through the decision process, the politics behind them; how the interests of the USA were paramount in this theatre and how Britain was very much the junior partner. I have read many accounts of PoWs held in Japanese camps and they were disturbing stories. This book extends those stories to make the reader realise how the Allied forces were subjected to the ego of one man, thus lengthening the agony that many had to endure, and indeed which cost many, many PoW lives.

A final thrust to the PoWs’ treatment was the way that the USA worked diligently and effectively to ensure that the Japanese leaders did not serve the full jail time given to them by courts. MacArthur ensured that the Japanese royal family were not brought before war crime trials, although they were fully involved in decisions in the treatment of PoWs. The USA also ensured that all prisoners were released no later than 1958, even though they had been sentenced to life imprisonment. All to ensure that USA had trading privileges with Japan! Little thought was given to the Allies or to the suffering of the PoWs.

Felton has a Doctorate from Essex University but now lives and lectures in China. In this book he has pulled together evidence of the Japanese atrocities and the thought processes behind them. He uses the orders sent out by the Japanese war Ministry and produced at War Crimes trials after the war showing that the actions taken by individual soldiers and officers was fully sanctioned by the Japanese government. Felton has written a truly disturbing book and if anyone has read about the treatment of PoWs by the Japanese, then they should read this book to see how little the Allies, in particular the USA, actually felt about the prisoners plight. Felton misses no punches and lays out the case against all those involved. I thoroughly recommend this book.

This book examines the period between the unconditional surrender of Japan on 14 August 1945 and the arrival of Allied liberation forces in Japanese-occupied territories after 2nd September 1945, a delay which handed the Japanese a golden opportunity to set their house in order before Allied war crimes investigators arrived. The author considers whether perhaps the greatest crimes were continuing deaths of Allied POWs after the Japanese surrender.