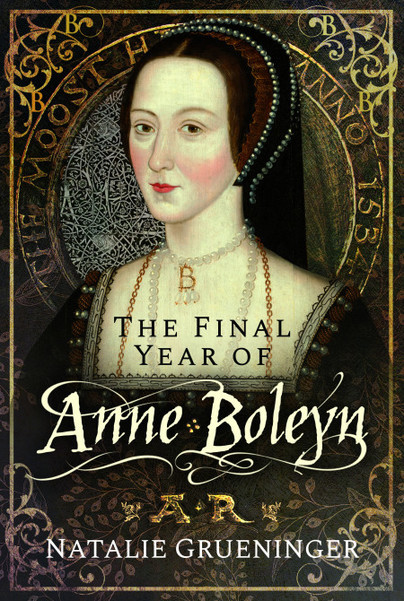 Preorder
Add to Wishlist
You'll be £15.99 closer to your next £10.00 credit when you purchase The Final Year of Anne Boleyn. What's this?
+£4.50 UK Delivery or free UK delivery if order is over £40
(click here for international delivery rates)

There are few women in English history more famous or controversial than Queen Anne Boleyn. She was the second wife of Henry VIII, mother of Elizabeth I and the first English queen to be publicly executed. Much of what we think we know about her is coloured by myth and legend, and does not stand up to close scrutiny. Reinvented by each new generation, Anne is buried beneath centuries of labels: homewrecker, seductress, opportunist, witch, romantic victim, Protestant martyr, feminist. In this vivid and engaging account of the triumphant and harrowing final year of Queen Anne Boleyn’s life, the author reveals a very human portrait of a brilliant, passionate and complex woman.

The last twelve months of Anne’s life contained both joy and heartbreak. This telling period bore witness to one of the longest and most politically significant progresses of Henry VIII’s reign, improved relations between the royal couple, and Anne’s longed-for pregnancy. With the dawning of the new year, the pendulum swung. In late January 1536, Anne received news that her husband had been thrown from his horse in his tiltyard at Greenwich. Just days later, tragedy struck. As the body of Anne’s predecessor, Katherine of Aragon, was being prepared for burial, Anne miscarried her son. The promise of a new beginning dashed, the months that followed were a rollercoaster of anguish and hope, marked by betrayal, brutality and rumour. What began with so much promise, ended in silent dignity, amid a whirlwind of scandal, on a scaffold at the Tower of London.

Through close examination of these intriguing events considered in their social and historical context, readers will gain a fresh perspective into the life and death of the woman behind the tantalising tale.

"The Final Year of Anne Boleyn is proof that a thoughtful, serious, and sensitive work of scholarship can also be entertainingly and delightfully written. Grueninger grasps the nitty-gritty and gives us a deeply considered, elegantly restrained, and often freshly compelling interpretation of this thrilling, contested, and fatal year." - Professor Suzannah Lipscomb, Historian, Author and Broadcaster.

"A heart-stirring account of Anne Boleyn's last living year. Researched flawlessly, the events are revealed in a compelling read; little-known facts adding to the tension which builds toward an emotional end. A must-read for fans and students of Tudor history." - S.V author of Anne Boleyn's Letter From the Tower; A New Assessment

"Genuinely ground-breaking, provocative yet sensitive, exquisitely well-researched and fair - both to Anne's friends and enemies - Natalie Grueninger's book shows us the complexities, and the secrets, that wove together during Anne Boleyn's final twelve months as queen. This is an exciting and important book of Tudor history." - Gareth Russell, Historian and author of The Ship of Dreams and Young and Damned and Fair

Natalie Grueninger is a researcher, writer and educator, who lives in Australia with her husband and two children. A trip to London in her early twenties, ignited her passion for Tudor England and she’s been researching the period ever since.

Natalie’s the author and co-author of several non-fiction books about the Tudors, including the acclaimed ‘In the Footsteps’ series, and runs the popular website On the Tudor Trail. She is also the host of ‘Talking Tudors’, a podcast for lovers of sixteenth-century England.