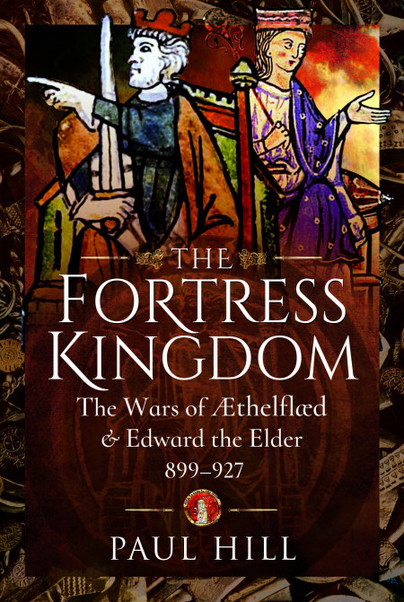 Preorder
Add to Wishlist
You'll be £20.00 closer to your next £10.00 credit when you purchase The Fortress Kingdom. What's this?
+£4.50 UK Delivery or free UK delivery if order is over £40
(click here for international delivery rates)

In this the second part of his four-volume military and political history of the Anglo-Saxon kingdom, Paul Hill follows the careers of Æthelflæd, Alfred the Great’s eldest daughter, and Edward the Elder, Alfred’s eldest son, as they campaigned to expand their rule after Alfred’s death. They faced, as Alfred had done, the full force of Danish hostility during the early years of the tenth century, a period of unrelenting turbulence and open warfare. But through their military strength, in particular their strategy of fortress building, they retained their hold on the kingdom and conquered lands which had been under Danish lords for generations.

Æthelflæd’s forces captured Derby and Leicester by both force and diplomacy. Edward’s power was always immense. How each of them used forts (burhs) to hold territory, is explored. Fortifications across central England became key. These included Bridgnorth, Tamworth, Stafford, Warwick, Chirbury and Runcorn (Æthelflæd) and also Hertford, Witham, Buckingham, Bedford and Maldon (Edward), to name a few.

Paul Hill’s absorbing narrative incorporates the latest theories and evidence for the military organization and capabilities of the Anglo-Saxons and their Danish adversaries. His book gives the reader a detailed and dramatic insight into a very sophisticated Anglo-Saxon kingdom.