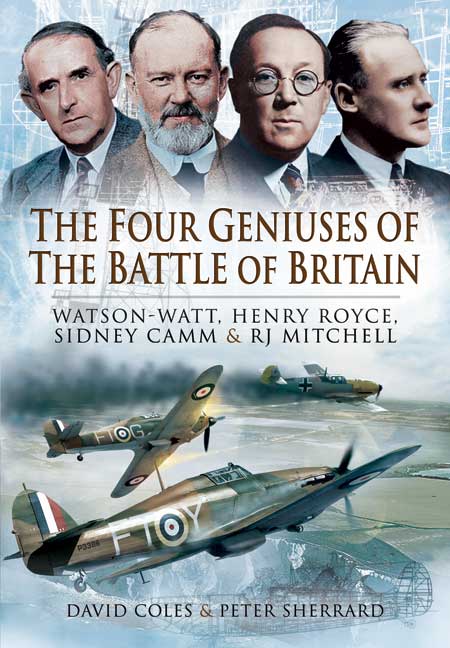 The Four Geniuses of the Battle of Britain (ePub)

Click here for help on how to download our eBooks
Add to Basket
Add to Wishlist
Get The Four Geniuses of the Battle of Britain (ePub) for FREE when you purchase 2 other eBooks.
Need a currency converter? Check XE.com for live rates

Had it not been for the vital contributions of these four men and their inventions described in this book, the Battle of Britain could not have been won by the Royal Air Force. Each of these brilliant men contributed enormously to the aircraft and equipment upon which the gallant RAF fighter pilots depended to take on and defeat the hitherto overpowering Luftwaffe during Hitler's European onslaught.
Watson Watt was the moving force behind Britain's vital early warning radar network that allowed Allied fighter aircraft to intercept the incoming German bomber raids.
Henry Royce was the driving force throughout the development of the Merlin engine that powered both the Hurricane and Spitfire. He approved the go ahead and design of the Merlin; initially as a private venture.
Although he sadly did not live to see the first engine built, he left a dedicated team, led by Ernest Hives, who produced the best engine of WW II. Sydney Camm persevered with the design of the Hawker Hurricane which was to destroy more Luftwaffe bombers in the Battle of Britain than any other type. It was amazingly resilient and provided an extremely stable gun platform. Not living long enough to see the success of his beautiful Spitfire, RJ Mitchell was the designer of the only British aircraft that could outperform the Nazi Bf 109s fighters and which allowed the attacking Hurricanes a little more safety while doing their job below.
This is the story of those men behind the scenes of the greatest air battle in history.

Refreshingly, with this volume we have a different slant on how the battle was won. While fully acknowledging that the battle was fought in the skies above Britain, this book explores the efforts of four notable figures, without whose contribution the Battle could not have been won at alll. The book is well written by two enthusiastic authors. I congratulate them on their efforts and hope you will too enjoy their book.

This book personalises some of those wartime engineering contributions in a biographical history of four men.

A new book tells the story of how one of Peterboroughs's most famous men made a vital contribution to The Battle of Britain.

Nothing brings history to life more than reading about first hand experiences of major events, even more so when the person , or people, concerned , live locally.

... heartily recommend this book to all with an eye for our history. This is not another war book, this is a carefully researched study of the lives of four men that set the foundations for their success in providing the UK with what it needed when it mattered most.

Both David Coles and his co author Peter Sherrard are retired Rolls-Royce Aerospace engineers who have researched and explained how the subjects of The Four Geniuses of the Battle of Britain worked to achieve their individual successes.

Both Peter Sherrard and his co author David Coles are retired Rolls-Royce Aerospace engineers who have researched and explained how the subjects of The Four Geniuses of the Battle of Britain worked to achieve their individual successes.