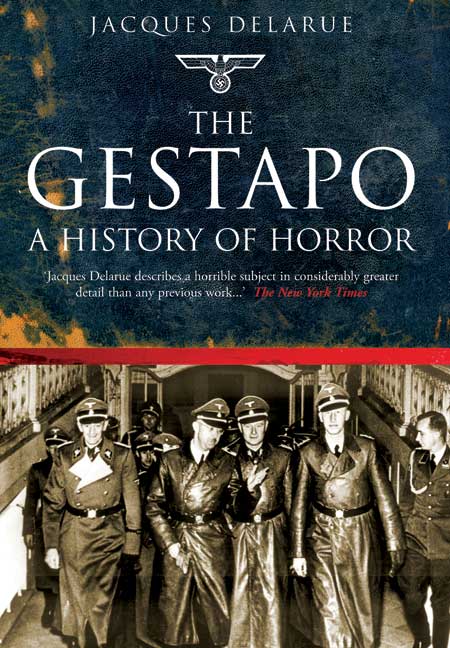 A History of Horror

Click here for help on how to download our eBooks
Add to Basket
Add to Wishlist
You'll be £4.99 closer to your next £10.00 credit when you purchase The Gestapo. What's this?
Need a currency converter? Check XE.com for live rates

'This book won't let the world forget . . . It details the background of this terror organization and its formation, the personalities who created it – the Goerings, the Himmlers, the Heydrichs – and how each added to its refinement as an instrument of torture.' – New York Daily NewsrnrnPerhaps the most terrifying embodiment of a government's disregard for the value of human life, the Gestapo, Nazi Germany's secret police force, was a veritable killing machine. It was the iron fist that Hitler and his henchmen used to strangle dissent and smash resistance to his rule. In The Gestapo, Jacques Delarue unflinchingly probes the organisation's history, and explains how such a horrific institution could come into being, who was behind it, what they did and why.

Drawing upon interviews with ex-Gestapo agents and the organisation's published and unpublished archives, Delarue delivers a complex history of the brutally efficient force whose work included murdering student resisters, soliciting denunciations of 'political criminals', establishing Aryan eugenic unions and running concentration camps. The Gestapo and its leaders – Himmler, Barbie, Eichmann, Heydrich, Müller, and others – devised and implemented some of the most abhorrent torture and extermination techniques the world has ever seen. This book offers a clear view of its crimes against humanity.

The official secret police force of Nazi Germany; the Gestapo was given the job of investigating and combatting 'all tendencies dangerous to the state'. They were given the power to imprison without judicial proceedings, often in concentration camps. It was also responsible for destroying any opposition to Hitler.

Held in the Berlin suburb of Wannsee on 20 January 1942, the purpose of the conference was to inform heads of German Government Departments that had responsibility for various policies relating to Jews of Reinhard Heydrich's appointment as the sole executor of the "Final solution to the Jewish question", and to obtain their agreement to subordinate their policies to him.