The Golden Age of Yorkshire Steam and Beyond (Paperback)

Add to Basket
Add to Wishlist
You'll be £13.49 closer to your next £10.00 credit when you purchase The Golden Age of Yorkshire Steam and Beyond. What's this?
+£4.50 UK Delivery or free UK delivery if order is over £40
(click here for international delivery rates)

The Golden Age of Yorkshire Steam includes a wealth of unique memories and experiences from a collection of railway enthusiasts, who in their youth were fascinated by the steam locomotives that ruled the rails. Discover what it was like growing up in York and experiencing the sights and sounds of the giants of the former LNER system, including A4s, A3s, A2s, A1s and V2s, along with the Jubilees, the Royal Scots, and Black Fives of the former LMS system and the BR Standards. Explore life on the footplate of the engines allocated to Royston shed, right up to the end of steam. Read about the push and pull service that ran from Cudworth - Barnsley - Cudworth across the iconic Oaks Viaduct, as well as the Barnsley - Doncaster and York - Doncaster - Darlington journeys. Memories of Leeds, Normanton, Doncaster, Wath and Penistone are also included, in addition to shed layout drawings of Royston, Doncaster and York.

Providing a fascinating insight into a railway system now long gone, the book is designed to ignite the memories of anyone who enjoyed the thrill of trainspotting during the 1950s and early 1960s, when steam was still king, before the rapid introduction of diesel and electric traction led to the complete elimination of steam from the rail network in 1968, with the exception of Flying Scotsman. The 1970s saw the return of steam on the mainline with steam specials powered by preserved locomotives.

"The past is preserved for us all in these old photographs."

Edited by Peter Bradfield, who gathered the experiences of seven of his friends and colleagues who recalled the days when steam power was king in the areas surrounding Barnsley, Leeds, Doncaster, Darlington and Penistone

All the authors have grown up with the sights and sounds of London North Eastern Region (LNER) giants, the former London, Midland Scottish (LMS) system and the British Railways Standard locomotives. The book will surely ignite the memories of anyone who enjoyed the thrill of trainspotting during the aforementioned years. The introduction of diesel and electric traction during 1968 led to the complete elimination of steam locomotives apart from those now preserved

This collection of articles by various one -time “spotters” is a pleasing exercise in nostalgia... Members aged 60+ could remember the sights, scenes and sounds described here and will enjoy this book even if “Nostalgia ain’t what it used t’be”!

The book is well detailed and nicely written from the ordinary person’s point of view. 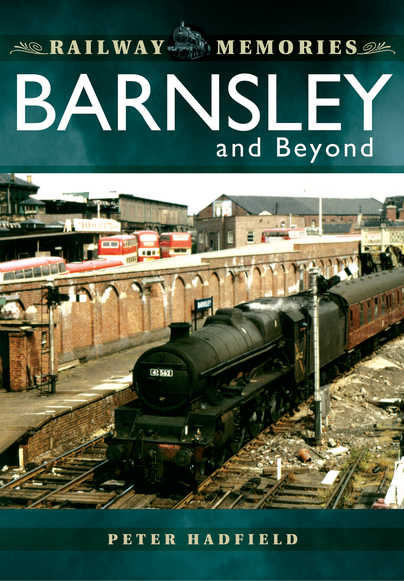 A collection of memories of a bygone age of the railway system that operated around the Barnsley area and beyond. It was a time when steam was still king (the local passenger, expresses and freight traffic were worked by steam), however the advent of diesel, although not initially noticeable, was gradually taking place.rnrnTowards the end of the 1950s and throughout the 1960s, rationalisation of the railway system and mass dieselisation took place, culminating in the end of steam on British railways (with the exception of the running of the Flying Scotsman) in August 1968.rnrnMany of the previously…

Click here to buy both titles for £26.48
Customers who bought this title also bought...