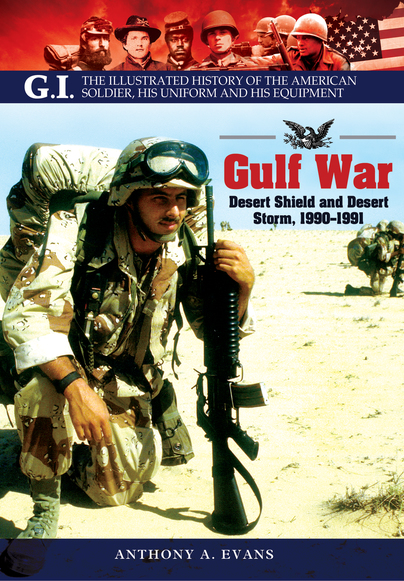 Add to Basket
Add to Wishlist
You'll be £12.99 closer to your next £10.00 credit when you purchase The Gulf War. What's this?
+£4.50 UK Delivery or free UK delivery if order is over £40
(click here for international delivery rates)

This illustrated series presents the uniforms and equipment of the United States Army from the nineteenth century to the present day. Each volume combines detailed and informative captions with over 100 rare and unusual images. These books are a must for anyone interested in American military uniforms and the history of the United States Army.
Two decades ago, the United States armed forces launched its largest offensive operation since the D-Day landings in World War II. The nature of the war was vastly changed; here was a purely desert environment, with sweltering heat during the day and bitter cold at night, making new demands on the men and their equipment.
Indeed, the need for speed during the build-up in Saudi Arabia created shortages of many desert-specific items, resulting in the deployment of troops variously clad and equipped. Many weapons and items of equipment were seeing combat for the first time together with new and sophisticated electronics gear.
In this book, G.I.s from all the branches of the U.S. armed forces are illustrated together with the many specialist units that have grown in importance over the last few decades.

The book has lots of photos of tanks, helicopters, mortars, missile systems, artillery and amphibious vehicles and even one motorcycle up close and personal. Views of how weapons are set up and the ammunition they use is useful for modelers wanting to get the details just right.

Definitely useful for the modeler interested in the Gulf War.

As well as all the heavy equipment, there is also plenty of coverage of the service men and women who took part in the conflict. These include their different uniforms, both the European Woodland pattern as well as the 'Chocolate Chip' desert camouflage pattern. Coupled with these are plenty of photos showing infantry weapons such as anti-tank launchers, M16A2 rifles, M60 machine guns and also the huge M82A1 .50 cal sniper rifle. There is lots in here that will remind may of us of that 100 hour ground war back in 1991. Just a thought for me though, while it is fresh in my memory, I have two daughters in their early 20's now who of course were not born at the time, so for anyone around their age, this is all 'history', similar to the way many of us might think of WW2 or Vietnam. Another good title in this series with lots useful for the modeller in particular.

About Anthony A Evans

Anthony A. Evans is the author of several illustrated books on modern military and aviation history including Modern Air Superiority Planes, Modern Attack Planes and Modern US Navy and Marine Corps Aircraft.