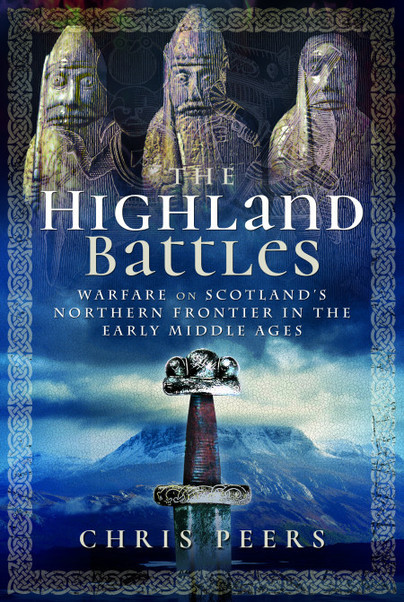 Warfare on Scotland's Northern Frontier in the Early Middle Ages

Add to Basket
Add to Wishlist
You'll be £25.00 closer to your next £10.00 credit when you purchase The Highland Battles. What's this?
+£4.50 UK Delivery or free UK delivery if order is over £35
(click here for international delivery rates)

Order within the next 9 hours, 49 minutes to get your order processed the next working day!

The wars fought in Scotland’s northern and western highlands between the ninth and fourteenth centuries were a key stage in the military history of the region, yet they have rarely been studied in-depth before. Out of this confused and turbulent period came the more settled and familiar history of the region. The Highlands and islands were controlled by the kings of Norway or by Norse or Norse-Celtic warlords, who not only resisted Scottish royal authority but on occasion seemed likely to overthrow it.

That is why Chris Peers’s ambitious study is of such value for he provides a coherent and vivid account of the series of campaigns and battles that shaped Scotland. The narrative is structured around a number of battles – Skitten Moor, Torfness, Tankerness, Renfrew, Mam Garvia, Clairdon and Dalrigh – which illustrate phases of the conflict and reveal the strategies and tactics of the rival chieftains.

Chris Peers explores the international background to many of these conflicts which had consequences for Scotland’s relations with England, Ireland and continental Europe. At the same time he considers to what extent the fighting methods of the time survived into the post-medieval period.

An interesting exploration of every major battle that took place in the Highlands between the 7th and the 13th century. It explores the combatants, their respective motives and connections, the nature of the battlefields, tactics, and even weapons.

A useful book for any military historian or those interested in miltary history.

This is an absolute definite read if you play wargame such as Saga for instance. This will provide you with the information to plan and run as campaign North of the wall. It has wild Scots against the Nordic Vikings, what more could you want. This is one of those books that will make you realise that you don’t know as much as you think you do. It’s a great read and is suitable not only to war gamers but anyone with an interest in Scottish history or the Early Medieval period. A must have book on anyone’s shelf.

I chose this book as I a native of Scotland and have always held an interest in the History of the country. I really enjoyed this book, the author has conducted much research and has created a book which is well written and really interesting.

An impressive work of meticulous scholarship that read with all the fluid narrative style of a novel, "The Highland Battles: Warfare on Scotland's Northern Frontier in the Early Middle Ages" also features four Appendices laying out the kinds of Scotland (844-1286), Norway (872-1280), Orkney (880-1231), the Isles and Man (1079-1265), a three page Bibliography, and a five page Index. An inherently fascinating, skillfully written, adeptly organize, ably presented, and extraordinarily informative read from cover to cover.

I've always loved history but even at school in Scotland, the emphasis was always on British or European history. Not so much on the battles that happened in our own back yard as it were.

We took part in some very vicious and bloody wars, over Clans, family, fortunes and of course our fiercest friend/foe - England! For each section we see who were the instigators, who took part, what the outcome was.

It's also useful for helping to locate the actual areas of the battles, some took over a large area over many days.

"The Highland Battles" was a bit of a revelation. I admit, I haven't spent a lot of time reading about Scotland's history, but this book surprised me. I thought there might be 3 or 4 battles of note - silly me! Chris Peers breaks events down in a very simple, entertaining, and enjoyable way. Considering how much time has passed, it's amazing to have so much detail on the battles, dates, places, and people involved. I think I need to read more Scottish history!

Scotland has long evoked a sense of wonder, but there is more to this beautiful land than meets the eye. It has been the home of some vicious and bloody conflicts - inner warfare from clans, and of course, the English.

This book goes through a series of battles that have been fought in the highlands of Scotland, and breaks each one down. Chris Peers breaks it down by date, who was where, who was involved, and the eventual outcome of the battle.

Now, before you think, "I have a pretty good grasp of what happened in Scotland," think again. I discovered quite a bit of information I had never heard before, and was able to better identify areas, the ins and outs, and of course - the major and minor players.

This is one that I need to buy and add to my research shelf. The information was amazing, and I don't think you can find a better guide to The Highland Battles than this book! For those who love Scottish history, and enjoy military conflicts as well, this is THE book that you need to read!

Whilst I considered myself sufficiently well read, there was still plenty to be learned. Names of the protagonists were known to me (Thorfinn, Sigurd, Macbeth, Somerled, Alexander) - I have read extensively and have a number of books myself on this topic.

The structure of the armies, weapons and equipment are covered off fairly early on - to save repetition - there is a lot of detail here. Use of archaeological evidence contemporary chronicles and the sagas add colour to the naval and land battles detailed within. Peers also provides details at the end of each chapter for visiting the sites.

The reader will appreciate the map of battle sites, the appendices which list the kings of Scotland, Norway, the Isles and Man, and the Earls of Orkney.

Definitely one for the Scottish history shelf of my library!

Being part Scots I was excited to read this. I thought Scotlands history revolved around the wall of the Romans and Braveheart. While both are true the detailed history of this beautiful land is much more intersting. Many kingdoms have come and gone in Scotland. So many that the land is soaked in history with the blood , sweat, and tears of its people. Mr Peers has woven an interesting and very readable history that covers all the connected parties in Scotlands wars. My favorite chapters concerned the Vikings and their attempts and many successes in taking farm land and coastal property of use. The viking presence is inherited by many scots . This book tells of Thorfinn and the other chieftains and Kings.Excellent , readable, and honest, history of Scotlands Highland Battles.

As someone who has been interested in the history of Scotland for quite awhile I was always disappointed that we didn't have much to go on. (If I had a time machine I would go back and yell at every civilization to write things down!), especially in regards to the highland clans and the battles that shaped them and Scotland as a nation.

I'm sure there is information in here even the most well read of History fans are unaware of and I highly suggest this book for anyone interested in Scottish history. There are some battles in here I wasn't even previously aware of and it's fascinating reading about them and tactics used by the war chiefs of the time.