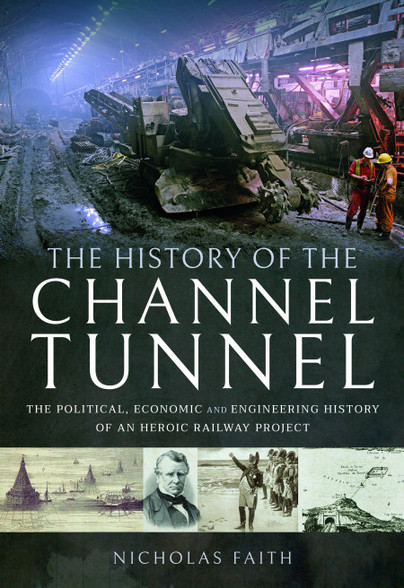 The History of The Channel Tunnel (Hardback)

The Political, Economic and Engineering History of an Heroic Railway Project

Add to Basket
Add to Wishlist
You'll be £25.00 closer to your next £10.00 credit when you purchase The History of The Channel Tunnel. What's this?
+£4.50 UK Delivery or free UK delivery if order is over £40
(click here for international delivery rates)

The Channel Tunnel has been one of history's most protracted, and at times acrimonious, construction projects.

Nicholas Faith, has delved into the archives and researched the fascinating truth about this project, that took so long to authorise and construct.

The author has found material in the archives, both in Britain and abroad, that has not been previously published or seen, outside a closed group of people.

The author has provided a thoroughly researched review of the history, from the first abortive attempts, to describe every aspect of the immense project. He has addressed the reasons for the first failures and the barriers to the eventually successful attempt, political, social, economic and engineering. The work on the successful project is reviewed in detail and the eventual success measured. The clear and readable text is supported by a very helpful photo plate section. This book is a must read for those interested in engineering and rail networks, but the full scope of the project should encourage a very wide readership.

The author covers the complicated financial and political history in considerable detail and clarity yet making interesting what could have been a very 'dry' story.

This volume may be of interest to a wide variety of readers. These could include Political Scientists, Students of Commerce, Railway Historians, those with a general interest in British transport history, Mining Professionals and even Railway Enthusiasts interested in ‘modern era’ British Railways.

A fine piece of research into a complex history making for an enjoyable and illuminating read.

Nicholas Faith, is a well respected author and journalist, who has been writing books and articles for over forty years, including a book on Classic Trucks and the World the Railways Made, a history of the social changes, that came about because of the invention of railways.

His latest book, Building the Channel Tunnel, looks at the social and political, history of this long and protracted construction project, from the early 1800s to the opening of the tunnel in the 1980s.