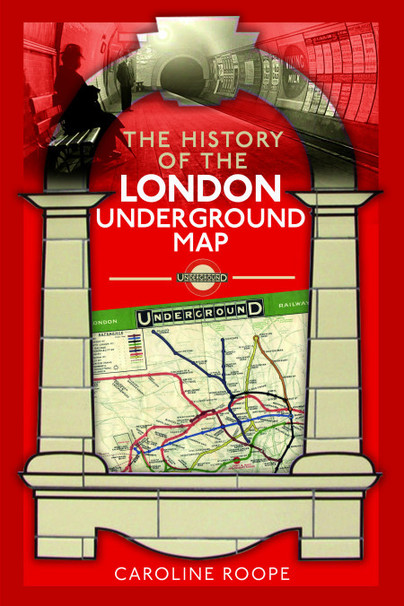 The History of the London Underground Map (Hardback)

Preorder
Add to Wishlist
You'll be £18.00 closer to your next £10.00 credit when you purchase The History of the London Underground Map. What's this?
+£4.50 UK Delivery or free UK delivery if order is over £40
(click here for international delivery rates)

Few transportation maps can boast the pedigree that London’s iconic ‘Tube’ map can. Sported on t-shirts, keyrings, duvet covers, and most recently, downloaded an astonishing twenty million times in app form, the map remains a long-standing icon of British design and ingenuity. Hailed by the art and design community as a cultural artefact, it has also inspired other culturally important pieces of artwork, and in 2006 was voted second in BBC 2’s Great British Design Test.

But it almost didn’t make it out of the notepad it was designed in.

The story of how the Underground map evolved is almost as troubled and fraught with complexities as the transport network it represents. Mapping the Underground was not for the faint-hearted – it rapidly became a source of frustration, and in some cases obsession – often driving its custodians to the point of distraction. The solution, when eventually found, would not only revolutionise the movement of people around the city but change the way we visualise London forever.

Caroline Roope’s wonderfully researched book casts the Underground in a new light, placing the world’s most famous transit network and its even more famous map in its wider historical and cultural context, revealing the people not just behind the iconic map, but behind the Underground’s artistic and architectural heritage. From pioneers to visionaries, disruptors to dissenters – the Underground has had them all – as well as a constant stream of (often disgruntled) passengers. It is thanks to the legacy of a host of reformers that the Tube and the diagram that finally provided the key to understanding it, have endured as masterpieces of both engineering and design.

I first took an interest in history of the London Underground map and typeface as a design student and have a small amount of knowledge about the topic already, so I was thrilled that this book covered so much I didn't know. It is a pretty dense read. I actually loved this and came away having learned a lot. It is clearly extremely well researched and the author's passion for the topic is evident throughout. The result is a wonderfully insightful and comprehensive guide to the history of the London Underground network.

I was expecting the book's focus to be solely on the history of the map; however, this book actually looks at the entire history of the network, spanning its inception, construction. I think it's a richer read for exploring the wider history to understand and explain decisions.

Fascinating subject, I'll definitely be recommending this one.

When I first visited London as a tourist, I fell in love with the city and it’s transportation system. Having lived in mid sized Canadian cities and having visited Toronto throughout my life, I was confounded by the choices. I soon discovered the magic carpet that the London Underground Map provided. I could plot out ways to get from point A to point B easily. And if it required a change of line, that too could be planned by using this wondrous thing.

It was not until I returned and lived there for three years that I learned the map and the topography of an area often had little in common. I learned that often, rather than backtracking on a different line, I could climb out of the pit and walk a short distance to something that was so much closer than it appeared. While that knowledge made my journeys simpler, it never eliminated the awe I had for that little map that opened up an exciting world for me. Over the years, when friends would go to London for the first time, I would do them up an itinerary based on what they wanted most to see and where they could piggyback one thing with another.

I had no idea of the work that went into creating the cartographical miracle. I always love stories about the history of the tube, especially during WWII. When one plummeted to the depths either in the lift at Russell Square or the escalators atKing’s Cross, the tube has been an adventure. What I did not know was the painful evolution into Beck’s icon that made navigation a breeze. Jigging around with it was not often an improvement. It’s simplicity and ease of use could never be exceeded. In fact, some attempts complicated things for the commuter.

In my most recent visits, I have travelled more by bus than tube, partly because of difficulty climbing stairs and mostly because I enjoy the views while going from place to place. But if I was going to travel a distance across London, I would still head to the tube. Whether I would be able to make sense of the changes to the map is another question. New lines and the Cross-Link create so much additional information that I suspect it is more difficult. All the more reason to admire the work of Beck and to long for the simpler days. Five purrs and two paws up.

According to Caroline Roope the Tube Map fundamentally lacks key mapping elements such as topography and urban detail, but what it does is to encourage a mental map of London, one that exists inside the passenger's head allowing them to traverse the city, much like London's cabbies achieve when studying The Knowledge.

The beauty of its design is, as Caroline Roope says: It is as much at home hanging on the wall of a modern art gallery as it is stuffed in the pocket of a London commuter. The flexibility of the Tube Map, and its capacity to grow and adapt along with the city it represents, has inspired numerous interpretations of what it means to traverse the metropolis.

Caroline Roope is a freelance writer, specialising in social history and genealogy. She contributes regularly to Who Do You Think You Are? Magazine, Best of British, Discover Your Ancestors Periodical and Discover Your Ancestors Bookazine, writing on social history topics as diverse as Scalextric to Victorian cross-dressing. Following an MA with Distinction in Heritage Management she spent over ten years working in the heritage and museums sector, for small scale independent charities as well as the National Trust and English Heritage and is published academically in the International Journal of Intangible Heritage.