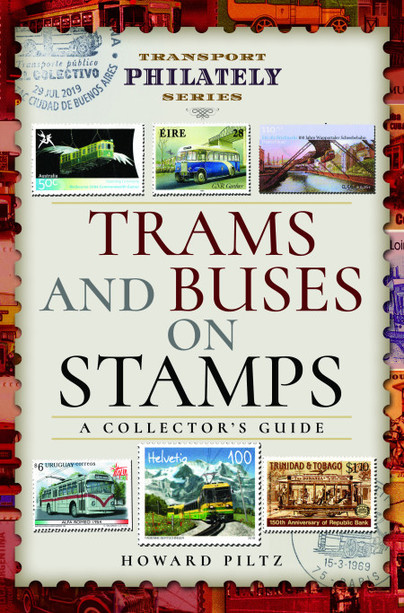 Trams and Buses on Stamps (Hardback)

Preorder
Add to Wishlist
You'll be £13.50 closer to your next £10.00 credit when you purchase Trams and Buses on Stamps. What's this?
+£4.50 UK Delivery or free UK delivery if order is over £35
(click here for international delivery rates)

In this, the fourth edition of the Transport Philately series the author looks at the treatment of transport using roads rather than rail or air. There have been some particularly attractive and colourful issues of stamps over the years ranging from a trio of beautifully presented illustrations of Israel’s early buses to the well-known issue of double-deck buses produced by the Royal Mail in 2001, and who incidentally have seen the commercial opportunity by accompanying many issues with other paraphernalia, including a gentleman’s tie featuring many of the bus illustrations. A well-known colleague in the Public Transport world still wears his!

Buses certainly are not as popular in the world of stamps as possibly aviation or wild-life, and trolleybuses even less so but the author has succeeded in finding a few, some of which are illustrated. Tramways, on the other hand, are a blessing to any collector with selections many and varied, some featuring trams from the beginning of the 20th century for their heritage interest to others providing an outlet of national or local pride at the inauguration of today’s systems in developed and developing countries across the world.

Never a year goes by without a new issue appearing somewhere in the world and the author likes to keep an eye on several sources of information including regular publications from the renowned Stanley Gibbons organisation, the fount of all knowledge concerning philately, as well as other equally valuable contemporary publishers. Then there are regular stamp fairs held throughout the UK and the world where dealers compete for your business, and at some of the bigger occasions – the postal authorities themselves. On your computer are the various internet sites and auction platforms where there can often be some real surprises and bargains to be found.

This is a colourful and comprehensive look at world stamps which depict scenes containing trams and buses. The guide is arranged by geographical region: British Isles, Europe, Mediterranean and Middle East, Asia, Oceania, and The Americas. Additionally, the author includes a fair bit of good general info for the budding philatelist on beginning and building a collection, finding types of stamps or areas on which to concentrate, and a good primer on storing and displaying a collection.

Four stars. The writing is simple and understandable and would be appropriate for beginners in the hobby of all ages.

Like the rest of the books in this collection this book will please fans of philately and trams and trolleybuses alike. Its large amount of information and stamp images are very useful to know the stamps of several countries of the world, some very curious.

When I was younger, I used to dabble in Stamp collecting, but the whole thing seemed overwhelming to me. Now, in the days of E-Commerce, it would be far easier to participate, but now I have no free-time. I still get a handful of stamp promo sheets, and first day covers from time to time so it keeps the hobby in the back of my mind. I think what always got me into these was looking at the gorgeous artwork that some stamps, especially foreign ones, often had. That fasciation I have is exemplified here, as this book takes one subject in stamp collecting and goes to be THE definitive book about it. This book has a narrow focus on European stamps depicting the history of public transportation. It's a quick read, and the author is extremely knowledgeable on this very particular field, so its pretty interesting.

Absolutely gorgeous book, with pages of colorful illustrations and history behind stamps with buses/teams from multiple countries. This would be a beautiful gift for any collector or philately fan, which I consider myself to be. I am an avid letter writer with penpals all over the world. Using vintage stamps is part of my routine, so I am always interested in books like this. Highly recommend!