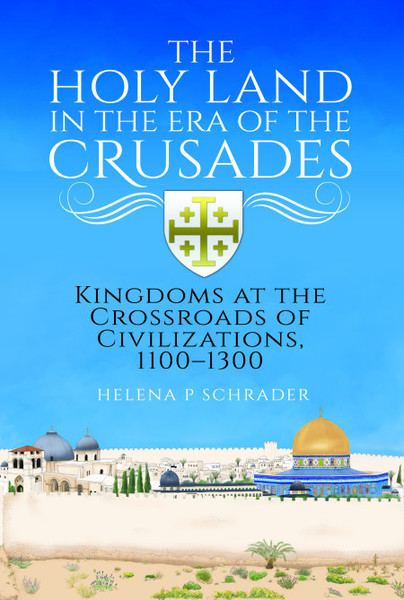 The Holy Land in the Era of the Crusades (Hardback)

Kingdoms at the Crossroads of Civilizations, 1100–1300

Add to Basket
Add to Wishlist
You'll be £20.00 closer to your next £10.00 credit when you purchase The Holy Land in the Era of the Crusades. What's this?
+£4.50 UK Delivery or free UK delivery if order is over £35
(click here for international delivery rates)

The Near East in the era of the Crusades was home to diverse populations Orthodox and Latin Christians, Shia and Sunni Muslims, Jews and Samaritans. It was the meeting-point for Arab, Turkish, Byzantine and Frankish culture, the latter itself a mixture of Western traditions adapted to circumstances in the crusader states by the Europeans who had settled in the Holy Land.

While the Crusades have become a synonym for brutality and bigotry, the crusader states represented a positive example of harmonious coexistence across two centuries. Likewise, while scholars from a wide range of disciplines including archaeology, art history, and medicine have shed light on diverse aspects of the crusader states, to date there is no single introductory source that provides a comprehensive overview of these unique states as a starting point for the uninitiated. The Holy Land in the Era of the Crusades aims to fill this gap while correcting common misconceptions by bringing together recent scholarly research on a range of topics to create a comprehensive description. It covers the history, demography, state institutions, foreign policy, economy, art, architecture, and lifestyle of the people who lived in the crusader states in the period from 1100 to 1300. It is organized in two main parts: a chronological historical overview, and a topical discussion of key features of these unique kingdoms. An additional, final chapter describes the rise and fall of the House of Ibelin to give the entire history a human face.

The Holy Land in the Era of the Crusades would make an ideal textbook for undergraduates while offering hobby historians an introduction to the crusader states with tips for further research.

Helena Schrader earned a PhD in History from Hamburg University in Germany before becoming a US diplomat in Africa and Europe. She has published three popular history books and is an award-winning novelist, whose novels set in the crusader states have won a total of 15 literary awards to date.

Jerusalem is one of the oldest cities in the world, with evidence of an original settlement dating back more than 4,000 years. Vitally important was the constant supply of water provided by the Gihon Spring, in a land that normally only experienced rainfall from November to March. Since then this Middle Eastern city has been attacked and devastated on numerous occasions. Former rulers include King David, who established the City of David, and his son Solomon, who expanded Jerusalem and built the first Great Temple on Mount Moriah. Destruction 2,600 years ago saw most of the inhabitants exiled…