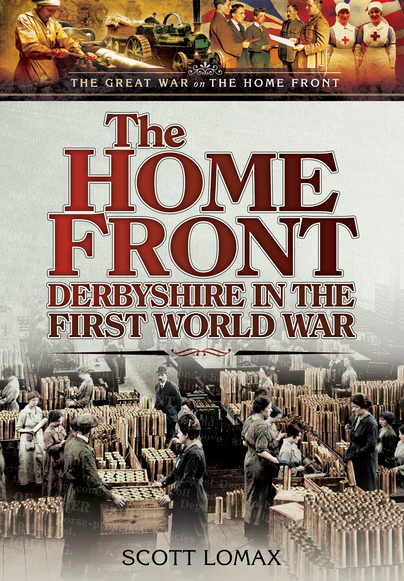 Derbyshire in the First World War

Click here for help on how to download our eBooks
Add to Basket
Add to Wishlist
You'll be £4.99 closer to your next £10.00 credit when you purchase The Home Front. What's this?
Need a currency converter? Check XE.com for live rates

The First World War saw many changes to Derbyshire that helped shape what the county is today. This book details the human experiences, thoughts, concerns, fears and hopes of the county during one the most important periods of its history. All aspects of civilian life are featured, including the run up to war and the reaction to its outbreak; the recruitment of men to the forces and the eventual conscription; the efforts of those who could not fight; industry and the munitions factories, where workers built the weapons and tools that helped win the war; the impact on agriculture and the role of farmers in feeding the nation; food shortages and rationing; the role of women; the role of the county in helping wounded servicemen and providing comforts and funds for those overseas; Belgian refugees; conscientious objectors and an alleged plot to kill the Prime Minister; anti-German feeling, hostility to Germans living in the county, and prisoners of war; civil defence and a Zeppelin raid that brought destruction and fear. For the first time in its history, the people of Derbyshire realised that the horrors of war were not confined to overseas battles but they could be witnessed and experienced in their own neighbourhoods.

By writing this book Scott Lomax added a new part to the conservation of this history. Generations to come will benefit from his work; not only the people living in Derbyshire but everyone interested in the history of the First World War.

'An admirable range of research lies behind this timely new publication from Derbyshire author Scott Lomax, providing an in-depth chronology that extends throughout the Great War, from the run up to the War to peace celebrations.'

'There have been many books published in the last couple of years about the First World War – but I guarantee than none will bring that conflict as close to home as a new book by Chesterfield author Scott Lomax, writes Barrie Farnsworth.

The Home Front: Derbyshire in the First World War provides as comprehensive a look at how that awful conflict impacted on the county and its people and, indeed, changed it for ever.

Scott looks at the recruitment and later conscription, of local men; the efforts of those left behind; the factories that fed the war effort; food shortages and rationing and, perhaps most significantly, the role of women.

There's much fascinating detail, too, on the country's role in treating the wounded; the prisoners of war we housed and the refugees too... as well as the Zeppelin raid that brought death and destruction to the county. All in all, it's a fascinating and thought provoking read.'