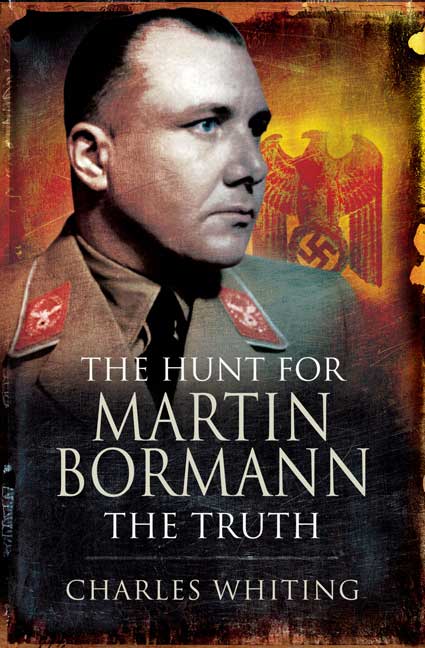 The Hunt for Martin Bormann (Paperback)

Add to Basket
Add to Wishlist
You'll be £12.99 closer to your next £10.00 credit when you purchase The Hunt for Martin Bormann. What's this?
+£4.50 UK Delivery or free UK delivery if order is over £35
(click here for international delivery rates)

On the night of 1 May 1945 Martin Bormann, head of the Nazi Party Chancellery and private secretary to Adolf Hitler, fled Fuhrer’s bunker into the ruins of Berlin. His subsequent disappearance became the source of countless rumours and wild speculation over the years, even including a theory that he had been kidnapped by the son of Churchill’s doctor and Lt Commander Ian Fleming, author of the James Bond books, and had spent the rest of his life in quiet retirement in the English Home Counties! In The Hunt for Martin Bormann, Charles Whiting examines over 50 years of rumours, claims and counter-claims to uncover the real fate of one of the most hunted men of the twentieth century.

Charles Whiting wrote his first novel in 1953, aged just twenty-six. He went on to be the world’s most prolific author of military books; he has sold in excess of three million in the UK alone, and his collective works number around 200. Charles also lived abroad for thirty years working in German chemical factories, US fashion companies, newspapers, magazines, universities – as an associate professor and lecturer – and spent a long spell in the US army. He died in 2007.

I do believe that it is a wellknown fact, that Martin Bormann and Hitlers Doctor: Stumphegger died when a tunnel collapsed in the Fuhrers bunker, at the very end of the war. In the seventies a pair of bodies was found during a digging in the area, and with glass-splinters in the mouth! When their faces was reconstructed - by an American Doctor - the one was undoubtedly Martin Bormann!