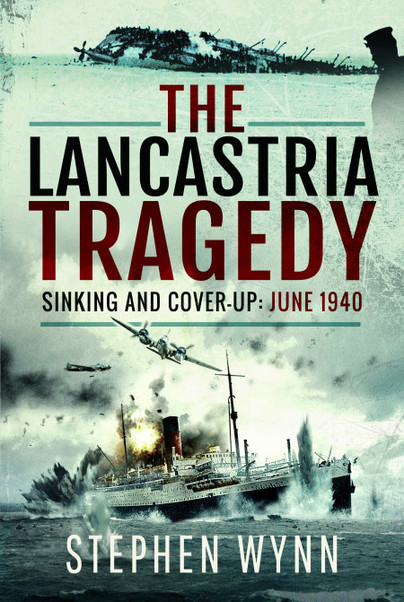 Add to Basket
You'll be £11.99 closer to your next £10.00 credit when you purchase The Lancastria Tragedy. What's this?
+£4.50 UK Delivery or free UK delivery if order is over £35
(click here for international delivery rates)

The story behind the sinking of the Lancastria comes in two parts: the sinking of the ship itself and the people who died, and the aftermath which led to allegations of a government cover up ordered by Winston Churchill. There is an ‘officially accepted' list of those who died, but allegations that hundreds more went down with the ship, and have not been accounted for, still linger to this very day.

The Lancastria, a pre-war Cunard cruise liner, was requisitioned by the Admiralty and turned in to a war-time troop ship. On 17 June 1940, whilst being used as part of Operation Aerial to evacuate civilian refugees and British military personnel from France, it was anchored about 5 miles from the coast of St Nazaire. While waiting for a naval escort to see it safely back to England, the Lancastria was attacked by enemy aircraft and sank within 20 minutes. As no official figures have ever been released, there is no way of knowing exactly how many lives were lost.

Winston Churchill placed what was known as a ‘D’ Notice on the tragic events, thereby restricting the Press from reporting it. However, once a New York newspaper had broken the story, the flood gates were opened for British newspapers to follow suit. But what was the purpose of the ‘D’ Notice? Was it because the British public had already received too much bad news since the war had begun, as Churchill declared? Or was it a cover-up?

Those who survived the incident were told in no uncertain terms not to speak about their experience, although plenty did. With much of the information about the Lancastria’s sinking in the public domain within a matter of days, the question has to be asked, why are official documents in relation to the matter being kept secret until the year 2040?

An interesting review of a little known event from WW2. The author provides great detail of individuals and their account of the sinking, as well as good factual material of how and why it occurred. A good read for any historical buff.

Stephen Wynn's The Lancastria Tragedy provides firsthand accounts of what happened during the lead up to the maritime disaster of June 1940 as well as the aftermath. It is a well researched book. I only wish we could find out more about those who were lost. After reading this book, I am even more determined to reading the materials that will be released regarding this matter in 2040. Is there any way we can petition to have them released sooner? Overall, this is an interesting subject matter, the writing is solid, and I give the book a 4/5.