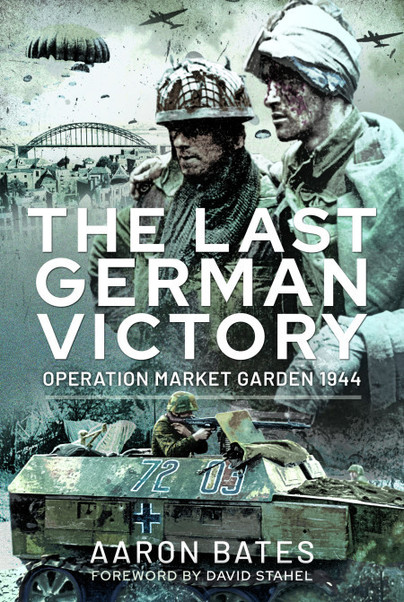 Preorder
Add to Wishlist
You'll be £20.00 closer to your next £10.00 credit when you purchase The Last German Victory. What's this?
+£4.50 UK Delivery or free UK delivery if order is over £35
(click here for international delivery rates)

Operation Market Garden – the Allied airborne invasion of German-occupied Holland in September 1944 – is one of the most famous and controversial Allied failures of the Second World War. Many books have been written on the subject seeking to explain the defeat. Historians have generally focused on the mistakes made by senior commanders as they organized the operation. The choice of landing zones has been criticized, as has the structure of the airlift plan. But little attention has been paid to the influence that combat doctrine and training had upon the relative performance of the forces involved. And it is this aspect that Aaron Bates emphasizes in this perceptive, closely argued and absorbing re-evaluation of the battle.

As he describes each phase of the fighting he shows how German training, which gave their units a high degree of independence of action, better equipped them to cope with the confusion created by the surprise Allied attack. In contrast, the British forces were hampered by their rigid and centralized approach which made it more difficult for them to adapt to the chaotic situation.

Aaron Bates’s thought-provoking study sheds fresh light on the course of the fighting around Arnhem and should lead to a deeper understanding of one of the most remarkable episodes in the final stage of the Second World War in western Europe.

It is a first-rate study that gives us not just a new perspective on Operation Market Garden, but provides a model for why military culture matters.

David Stahel, from the foreword

Aaron Bates is a recent Master’s graduate from the University of Calgary’s Department of History. His research has been focused on the military history of the Second World War, particularly the operational and tactical performance of the German military and the relationship between theory and practice in combat doctrine. His undergraduate thesis ‘The Last Bridge to Stalingrad: The Luftwaffe Air Transport Force and the Failure of the Stalingrad Airlift’ received the Dr Stephen J. Randall Prize in History and was published in revised form in the Journal of Slavic Military Studies as ‘For Want of the Means: A Logistical Appraisal of the Stalingrad Airlift’.