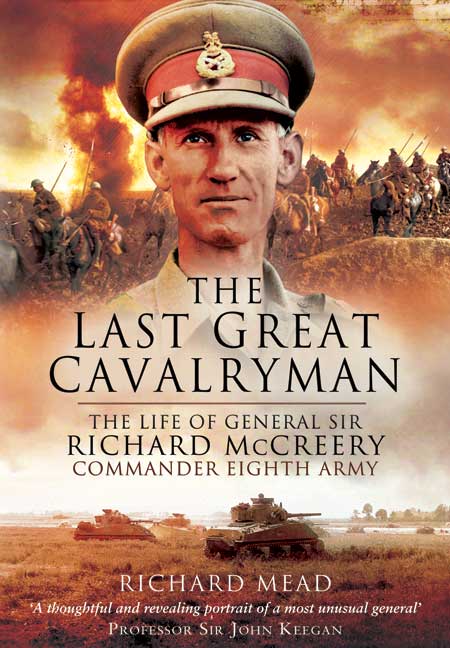 Click here for help on how to download our eBooks
Add to Basket
Add to Wishlist
You'll be £4.99 closer to your next £10.00 credit when you purchase The Last Great Cavalryman. What's this?
Need a currency converter? Check XE.com for live rates

Nearly 70 years have passed since October 1944 when Dick McCreery became the third and final Commander of the legendary Eighth Army in Italy – in succession to Monty and Oliver Leese. With his outstanding record as a fighting soldier and armoured tactician, it was no surprise to anyone that he was to be hugely successful.

McCreery was commissioned into the 12th Royal Lancers in 1915 and served on the Western Front surviving a serious wound and winning the MC. After commanding the regiment, he joined the staff of 1st Division under Alexander in 1938 before being given command of 2 Armoured Brigade. He won the DSO for his leadership during the Second BEF's attempt to stop the Germans south of the Somme in the aftermath of Dunkirk. As the Author reveals, McCreery's career nearly came to an abrupt end in Egypt in 1942. Sacked by Auchinleck, with whom he had major differences, he was in the right place to be selected as Chief of Staff to the Auk's successor, Alexander. He was later credited by Alex (but not by Monty!) for the solution to the El Alamein victory. He was promoted to command X Corps at Salerno, during the battles on the Gustav Line and in the advance to the Gothic Line.

As Commander 8th Army it was his brilliant plan to seize the Argenta Gap which enabled the Allies to drive the Germans back across the River Po into Austria. He subsequently became British High Commissioner in Austria, C in C British Army of the Rhine and British Military Representative at the UN, retiring in 1949. Remarkably, this is the first biography of arguably one of the finest British fighting generals of the Second World War and, certainly, one of the outstanding horsemen of his era. It should be read by all with an interest in leadership.

Richard Mead has been quietly ploughing the furrow of Second World War British military biography filling some surprisingly considerable gaps. Now we have the first full biography of one of Britain's unduly forgotten commanders of the war, Dick McCreery. It is thorough and rigorous in its use of primary and secondary sources. Highly recommended.

This is a gripping account...Excellent Biography 10/10

McCreery was a key figure in the development of armoured warfare, an excellent tactician and among the most important British fighting generals of the war, all of which makes this book an important reference source.

The Cavalryman being General Sir Richard McCreery - third and final commander of the legendary Eighth Army, described by Max Hastings as 'one of the ablest and least recognised British Generals of World War II'. A biography has been clearly overdue, this one ably makes up for lost time.

Dick McCreery...was a professional soldier. The inter war years saw a time of study, sport, marriage and bloody hard work. He was fortunate to find favour with certain senior officers who looked kindly on him, most notably Alan Brooke the future CIGS. This meticulous biography presents it all in an easy to read way which carries the reader along happily and all too soon you'll find yourself where the book intends us to be all along; at the crucible – World War II. McCreery's war was a fascinating one...Richard Mead was encouraged by some very worthy historians to write this book and he has not let them down. There was a hole on the biographical shelf of British Generals and it has been filled. Rather than another volume on one of the established stars we've had one of the very important blanks filled in. Well done Mr Mead!

The fascination with the last of the cavalry is enduring, perhaps partly because of the horseman's apocalyptic links: one of the contenders for the last cavalry charge, about which there is no consensus, is the battle of Megiddo in 1918, on the Plain of Armageddon. Now we have another question: who was the last great cavalryman? Not that it is actually posed in this engaging biography of the British contender to that title, the little-known Sir Richard McCreery.

Richard Mead recounts the details of McCreery's life not wholly uncritically. How the claim of 'the last great cavalryman' compares with those of, say, Zhukov, Patton, von Senger und Etterlin or Bettoni is another matter. but the claim to the British title is unchallengeable.

McCreery was commander of the Eighth Army from September 1944 and was awarded a Distinguished Service Order for his leadership at Dunkirk. At the end of his career, he had achieved a remarkable record both as a fighting soldier and armoured tactician on battlefields from north Africa to Italy.

The flysheet notes explain that 'this is the first biography of arguably one of the finest British fighting generals of the Second World War and, certainly, one of the outstanding horsemen of his era. It should be read by all with an interest in leadership.' A quarter of the book relates to the Italian campaign from the Salerno landings and particularly to his remarkable offensive through the Argenta Gap, which prevented a German escape across the River Po.

The life and times of a distinguished military general is charted meticulously in a book by a Gloucesterhire historian. Author Richard Mead has brought to life the career of Sir Richard McCreery, who played a pivotal role during the Second World War in his new book.

This is the first time that the story has been publicly told of the final commander of the legendary Eighth Army in Italy, General Sir Richard McCreery. Widely credited by many for the El Alamein victory, this is the long-overdue story of one of the most important fighting generals of World War II.

Author Richard Mead...received the full backing of the family for his insightful book and gained access to the general's private diaries to help build a picture of the man. The book takes us through the general's distinguished careers in both world wars and examines this keen horseman's contribution to armoured warfare. For military buffs, this will be a welcome addition to the bookcase.