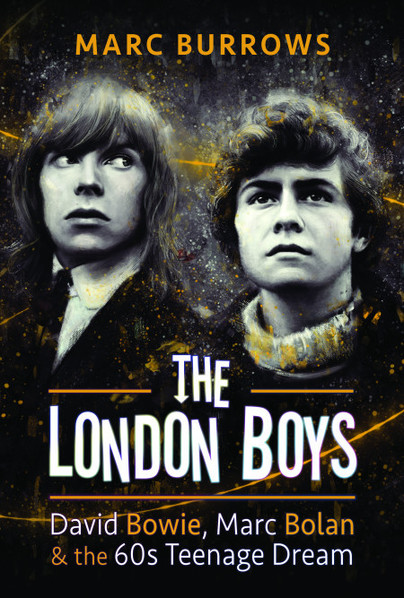 Preorder
Add to Wishlist
You'll be £16.00 closer to your next £10.00 credit when you purchase The London Boys. What's this?
+£4.50 UK Delivery or free UK delivery if order is over £40
(click here for international delivery rates)

Rock n roll fanatics, mods, beat group wannabes, underground hippies, glam rock icons: David Bowie and Marc Bolan spent the first part of their careers following remarkably similar paths. From the day they met in 1965 as Davie Jones and Mark Feld, rock n roll wannabes painting their manager's office in London’s Denmark Street, they would remain friends and rivals, each watching closely and learning from the other. In the years before they launched an unbeatable run of era-defining glam rock masterpieces at the charts, they were both just another face on the scene, meeting for coffee in Soho, hanging out at happenings and jamming in parks. Here, they are our guides through the decade that changed everything, as the gloom of post-war London exploded into the technicolour dream of the swinging sixties, a revolution in music, fashion, art and sexuality. Part duel-biography, part social history, part musical celebration of an era, The London Boys follows the British youth culture explosion through they eyes of two remarkable young men on the front lines of history.

Marc Burrows is a music critic, author and occasional comedian. His biography The Magic of Terry Pratchett won the 2021 Locus Award for Best Non-Fiction, and he writes regularly for The Guardian, Observer, Quietus and Hey U Guys about music, film and pop culture. He plays bass in the cult Victorian punk band The Men That Will Not Be Blamed For Nothing, and lives in North London with his wife, the poet and author Nicoletta Wylde and a small black cat called Princess. He also has two tropical fish, who he suspects might be psychopaths.