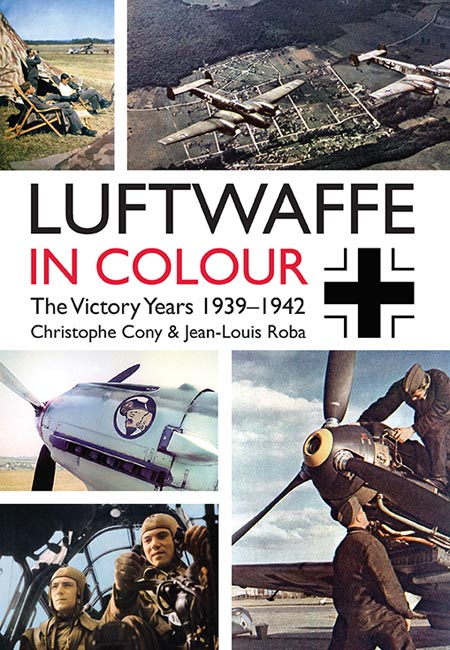 The Luftwaffe in Colour (Paperback)

Add to Basket
Add to Wishlist
You'll be £19.99 closer to your next £10.00 credit when you purchase The Luftwaffe in Colour. What's this?
+£4.50 UK Delivery or free UK delivery if order is over £35
(click here for international delivery rates)

This remarkable work pulls the lid off one of the legendary air forces in history at the very peak of its power–unveiling the and machines as they truly existed day–to–day, underneath the propaganda of their own regime and the scare stories of their enemies.

In Hitler’s Germany, colour photography was primarily co-opted for state purposes, such as the military publication Signal, or the Luftwaffe’s own magazine, Der Adler (Eagle). But a number of men had cameras of their own, and in this painstakingly acquired collection, originally published in France, we can witness true life on Germany’s airfields during the period of the Luftwaffe’s ascendancy.

Thus not only do we see famous planes such as the Me-109, Ju-87 or He-111, but the wide variety of more obscure types with which the Germans began the war. The array of Arados, Dorniers, Heinkels – not to mention elegant 4-engine Condors – that were initially employed in the war are here in plain sight and full colour, providing not only an insight into WWII history but a model maker’s dream.

Just as fascinating are the shots of the airmen themselves, along with their groundcrews – full of confidence and cheer as they bested every other air force in Europe during these years, with the single exception of the RAF’s Fighter Command in late-summer 1940. But that was no big stumbling block to the Luftwaffe, which had bigger fish to fry in Russia and North Africa the following year.

In the authors’ next work, The Years of Defeat , we will see how the war turned more grim for the Luftwaffe, even as its expertise and skill at more deadly aircraft designs, increased. In The Victory Yearswe have a uniquely intimate view of an air force at the very apex of its capabilities.

Christophe Cony who lives in France is a well-respected World War II aviation historian who has worked on numerous books and magazine articles for the leading French military aviation publisher, Lela Press. He is the co-author of Luftwaffe in Colour Volume 1: The Victory Years 1939-1942.