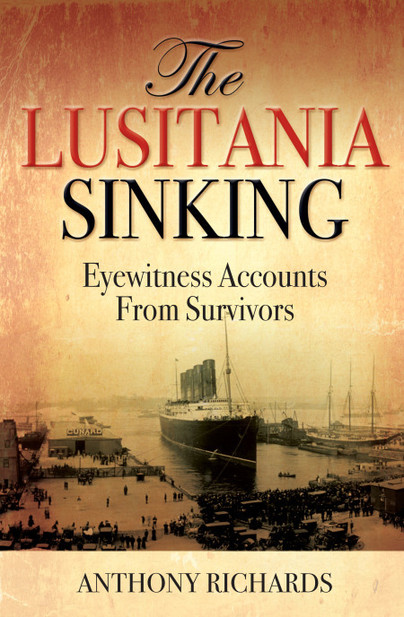 Add to Basket
Add to Wishlist
You'll be £19.99 closer to your next £10.00 credit when you purchase The Lusitania Sinking. What's this?
+£4.50 UK Delivery or free UK delivery if order is over £35
(click here for international delivery rates)

‘A fascinating, excellently-written reassessment of the sinking of the iconic liner Lusitania using the letters, diaries and memoirs of those who were extremely fortunate to survive. Anthony Richards is at his best in this ground-breaking history.’ - Richard van Emden

'We went up on deck and were looking around when the awful crash came. The ship listed so much that we all scrambled down the deck and for a moment everything was in confusion. I glanced around but could find no trace of Mr Prichard.' - Grace French

The Lusitania sinking is an event that has been predominantly discussed from a political or maritime perspective. For the first time, The Lusitania Sinking tells the story in the emotive framework of a family looking for information on their son’s death.

On 1 May 1915, the 29-year-old student Preston Prichard embarked as a Second Class passenger on the Lusitania, bound from New York for Liverpool. By 2pm on the afternoon of 7 May, the liner was approaching the Irish coast when she was sighted by the German submarine U-20. A single torpedo caused a massive explosion in the Lusitania’s hold, and the ship sank rapidly. Within 20 minutes she disappeared and 1,198 men, women and children, including Preston, died.

Uncertain of Preston’s fate, his family leaped into action. His brother Mostyn, who lived in Ramsgate, travelled to Queenstown to search morgues but could find nothing. Preston’s mother wrote hundreds of letters to survivors to find out more about what might have happened in his last moments. The Lusitania Sinking compiles the responses.

Perhaps sensing his fate, Prichard had put his papers in order before embarking and told a fellow student where to find his will if anything happened to him. During the voyage, he was often seen in the company of Grace French, quoted above. Alice Middleton, who had a crush on him but was too shy to speak to him throughout the entire voyage, remembered that he helped her in reaching the upper decks during the last moments of the sinking:

'[The Lusitania] exploded and down came her funnels, so over I jumped. I had a terrible time in the water bashing about among the wreckage and dead bodies… It was 10.30 before they landed me at the hospital in an unconscious condition. In fact, they piled me with a boat full of dead and it was only when they were carrying the dead bodies to the mortuary they discovered there was still life in me.'


It is certain that arguments will continue to rage over aspects of this disaster: should Germany have permitted unrestricted submarine warfare against passenger ships, was the Lusitania’s captain reckless in charting his chosen course, was the ship carrying contraband munitions, and so forth. By contrast, Anthony Richards has gone to the heart of the matter by providing a platform for some excellent accounts of what happened in the often simple words of those who were actually there.

A story of tragedy amidst the first world war.
The eyewitness accounts bring the sinking to life.
A story of family love.
A must read for the Maritime lover.
Within 20 minutes 1,198 lives were lost.
A very well put together account of the embarkation, final voyage, sinking and investigations that followed.
Over 35 illustrations.

Listed in the 'Books of the Year' feature

"Lusitania Sinking is a fine account of the creation and devastation which happened to one particular community, well remembered a hundred years on."

This is an outstanding book using letters, diaries and memoirs of those who were extremely fortunate to survive. It is very well written and I would very highly recommend it to our readers.

Besides Preston’s story, Richards gives us the background to the sinking, the enquiry, the vexed question of the munitions in the cargo, and the political impact. The incident did not of itself bring America into WW1, but from then on America definitely favoured the Allied cause. Well worth reading even if you know the story well.

This work publishes, for the first time, the full archive of letters relating to a 29 year old passenger called Preston Pritchard.

Now kept in the Imperial War museum, the Pritchard archive is a fascinating selection of first hand witness accounts, helpfully placed into context in The Lusitania Sinking , which is also worth a look for its collection of high-quality images, academic bibliography and comprehensive index.

A story that deserves to be remembered for the strong human and emotional impact it had at the time, and still has today.

This book is informative and touching, resulting from a mother's search for information about her son who was embarked aboard the Lusitania. In writing to survivors, she built up an amazing collection of accounts from survivors. To say that this has provided a previously unseen historical treasure trove is an understatement. It provides insight, observation and experience from people under great stress. It details many previously unknown facts and insights.

This book provides a detailed account of the tragedy that was the sinking of the Lusitania. A commercial civilian cruise liner sunk off the coast of southern Ireland en route to its home port Liverpool, from New York. An impressively researched book that highlights intelligence revealed decades after the incident took place. The sinking was a horrible tragedy and needless loss of life for UK and US citizens while World War I was raging in Europe. The book is stacked with eyewitness accounts from the passengers, crews, survivors, rescuers, as well as observations from the German U-Boat commander that brought her down. The book contains numerous maps and photos of personnel impacted by the tragedy.

What the Germans hoped to gain from sinking a great passenger liner such as the Lusitania is beyond me, so one has to put aside motive and concentrate on the extraordinary stories of the survivors, which Anthony Richards does magnificently in this “eyewitness accounts” book. It’s not a disaster mover in the sense of the Poseidon Adventure, but it is moving and powerful, and that is what books such as this one should be about. Superb.

The author succeeds in telling the story of the loss of the Lusitania through the prism of the death of one passenger Preston Pritchard and the inquiries made by his family to discover what happened to him. The depth and historical value of the correspondence with all and any who could add information is intriguing. It was not an inquiry conducted by professional detectives but the quality of their search and results is incredible and adds a very personal dimension to the story of the Lusitania. Recommended.