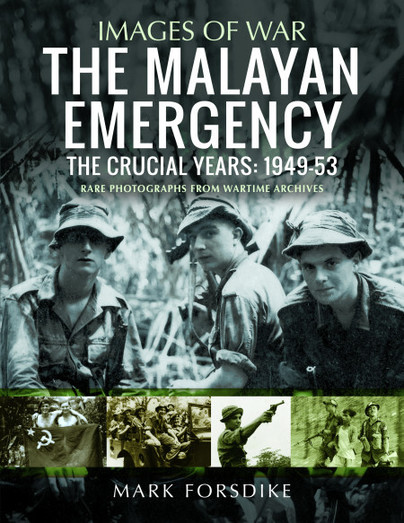 Add to Basket
Add to Wishlist
You'll be £18.99 closer to your next £10.00 credit when you purchase The Malayan Emergency. What's this?
+£4.50 UK Delivery or free UK delivery if order is over £40
(click here for international delivery rates)

From 1948 through the 1950s British and Commonwealth forces fought a ruthless communist insurgency on the Malay peninsula. Thanks to sound generalship and the dedication and resilience of the officers and men, the security forces eventually broke the terrorists’ resolve.

1st Battalion The Suffolk Regiment was just one of many British units involved in this successful campaign, known as the Malayan Emergency. Their tour between 1949 and 1953 coincided with the most crucial years when the future of the country and, arguably, the South East Asia region lay in the balance.

As this book describes in words and superb contemporary images how the Battalion, the majority of whom were National Servicemen, operated under the most demanding jungle and climatic conditions, earning itself an enviable reputation. The Battalion’s experiences are well recorded here and typify those of tens of thousand servicemen whose efforts secured a unique victory.

The Malayan Emergency is a solid addition to the Images of War series. These books succeed on their combination of text and photographs, and Forsdike has managed both of those very well. He allows the men who fought to speak for themselves as much as possible, and he weaves that into the context of the conflict. The photographs are mostly of the men whose memories we are reading, but they also give an atmospheric account of the conditions and climate they endured, and Forsdike does not shy away from including images of death on both sides.

Mark Forsdike has strong links with the Suffolk Regiment. His grandfather served with the 4th Battalion in the Second World War spending three and a half years as a Japanese prisoner of war. Mark is proud to be an honorary member of the Old Comrades Association, Standard Bearer of the Ipswich Branch, a volunteer at the Regimental Museum and administrator of theg He is the author of Fighting Through to Hitler’s Germany - Personal Accounts of the Men of 1 Suffolk, 1944 – 1945 (Pen and Sword Military, 2020)

An engineer by profession, he lives in Ipswich with his wife and two children.