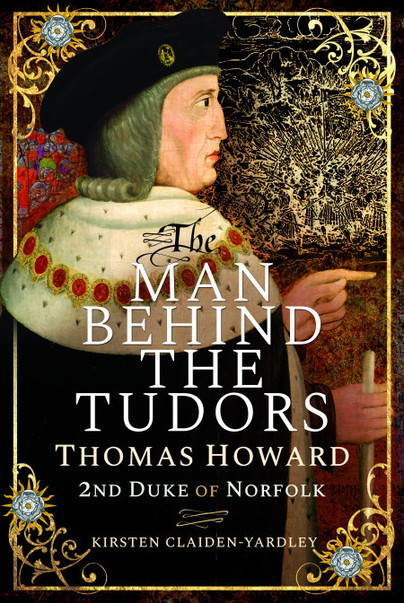 The Man Behind the Tudors (Hardback)

Add to Basket
You'll be £15.99 closer to your next £10.00 credit when you purchase The Man Behind the Tudors. What's this?
+£4 UK Delivery or free UK delivery if order is over £30
(click here for international delivery rates)

Thomas Howard, 2nd duke of Norfolk, lived a remarkable life spanning eighty years and the reigns of six kings. Amongst his descendants are his granddaughters, Anne Boleyn and Catherine Howard, and his great-granddaughter, Elizabeth I. The foundations of this dramatic and influential dynasty rest on Thomas’ shoulders, and it was his career that placed the Howard family in a prominent position in English society and at the Tudor royal court.

Thomas was born into a fairly ordinary gentry family, albeit distantly related to the Mowbray dukes of Norfolk. During the course of the fifteenth century, he and his father would rise through the political and social ranks as a result of their loyal service to Edward IV and Richard III. In a tragic turn of events, all their hard work was undone at the Battle of Bosworth and his father was killed fighting for King Richard. Imprisoned for treason and stripped of his lands and titles, Thomas had to start from the beginning to gain the trust of a new king. He spent the next thirty-five years devoting his administrative, military and diplomatic skills to the Tudors whilst rebuilding his family fortunes and ensuring that his numerous children were well-placed to prosper.

Article: 'The Princes in the Tower: Was our duke guilty? as featured by

I'm a Tudor fanatic, but most of what I've read has been centered on the stories of the Tudor monarchs, and, if it concerned the Howards at all, it was in association with the more scandalous members of the family, like Anne Boleyn and Catherine Howard, or Thomas Howard the Younger, the 3rd Duke. But Thomas Howard, 2nd Duke of Norfolk is very much the progenitor of the family, being the first to work to advance them from their relative humble origins through their noble connections. While it did seem unlikely in the political climate, given their initial service to the Yorkists, and Richard III was defeated by Henry VII, Thomas is repeatedly shown through the historical record as making himself a valuable asset as the Tudor dynasty rose, going from imprisonment to weaving his way into the King's good graces. I love how Claiden-Yardley demonstrates what a keen diplomat he was, showing what a triumph his life was, while also delving into the mixed legacy of his descendants, the more infamous Howards. The book is also well-researched and cited, while also never feeling like a slog to get through, with an easy prose style that is easy to engage with.

Kirsten Claiden-Yardley studied Modern History as an undergraduate at Merton College, Oxford, before completing a part-time Masters course in English Local History at Kellogg College, Oxford. She later returning to Merton College to complete a PhD on noble identity and commemoration in the Tudor period, as part of the collaborative project titled "Representing Re-Formation". In between times, she has worked in publishing and as Assistant Church Buildings Officer for the Diocese of Oxford. She was also engaged as a production researcher on the television adaption of Wolf Hall and as a historical adviser on a number of fiction and non-fiction publications. She is the co-founder of a heritage consultancy partnership specialising in ecclesiastical projects, and mother to a lively two-year-old.