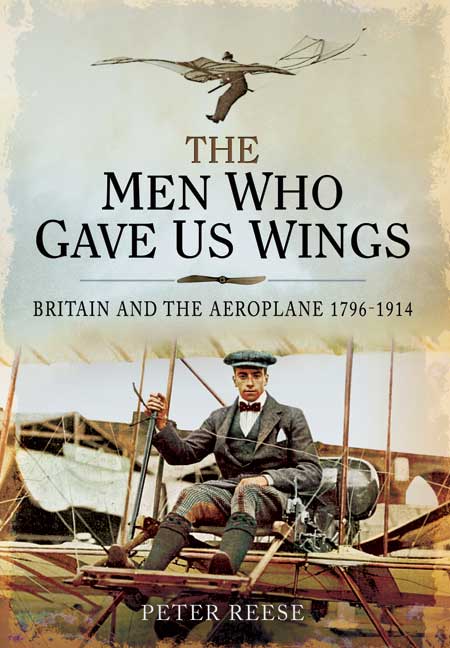 The Men Who Gave Us Wings (ePub)

Click here for help on how to download our eBooks
Add to Basket
Add to Wishlist
You'll be £4.99 closer to your next £10.00 credit when you purchase The Men Who Gave Us Wings. What's this?
Need a currency converter? Check XE.com for live rates

Why did the British, then the leading nation in science and technology, fall far behind in the race to develop the aeroplane before the First World War? Despite their initial advantage, they were overtaken by the Wright brothers in America, by the French and the Germans. Peter Reese, in this highly readable and highly illustrated account, delves into the fascinating early history of aviation as he describes what happened and why. He recalls the brilliant theoretical work of Sir George Cayley, the inventions of other pioneers of the nineteenth century and the daring exploits of the next generation of airmen, among them Samuel Cody, A.V. Roe, Bertram Dickson, Charles Rolls and Tommy Sopwith. His narrative is illustrated with a wonderful selection of over 120 archive drawings and photographs which record the men and the primitive flying machines of a century ago.

As featured on BBC Radio Surrey and in Essence Magazine.

A well researched, interesting and entertaining account of the pioneers of British Aviation.

...this is an excellent account of the pioneering period of British aviation, packed with fascinating material.

The combination of biographic and technical information is just right and I remained interested in a period that does not normally stimulate my interest throughout.
The overall mix of politicians, designers, pilots and the aircraft make this a surprisingly exciting read.

Peter Reese's work provides an overview of various noted pre-World War I aviation figures... his work contributes to the body of knowledge of aviation history of this time. It is recommended for those who want to know more about how Britain's aviation evolved in the formative years prior to the war.

The extensive bibliography, as well as the great number of references and quotations from earlier published works which appear in the text, testify to the considerable research which has made the book a detailed and valuable record of this involved tale.

The book is founded on careful research and analysis but it is Peter Reese's interest in the main characters within his story as much as his skills as a writer which ensure that this book is both readable and informative. The outcome is likely to be a standard reference book in terms of British aviation as the author brings together in one comprehensive account the large and diverse canvas of early British aviation history. For most readers, this book will fill many gaps in personal knowledge of the subject and does so in a manner that is both rewarding and enjoyable to read.

The Men Who Gave Us Wings is an incredibly intricate and well-told story of the earliest history of aircraft development. Perfectly laid out into four sections covering the designs, struggles, accomplishments and U-turn towards war as 1914 approached. A brilliant overview of how we got to the point at which flying aces could soar straight into the history books.

In the mid-1800s, Britain led the scientific and industrial development that the Industrial Revolution had produced. Aviation was a branch that result in innovative designs that foresaw the future but after the successful gliders and experimental power plants, interest seemed to wane. France, Germany and the USA pressed on and were flying powered and controllable aircraft in the early years of the twentieth century.

This book looks into this odd hiatus and on to the revival of interest. Many designs were developed, some actually worked. Apart from individual schemes, the Government began to invest in aircraft and set up the factory at Farnborough that was intended to find types that could provide the Army with adequate aircraft.