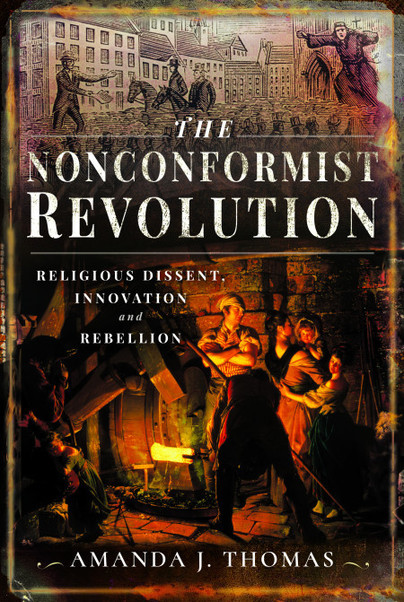 Click here for help on how to download our eBooks
Add to Basket
Add to Wishlist
You'll be £4.99 closer to your next £10.00 credit when you purchase The Nonconformist Revolution. What's this?
Need a currency converter? Check XE.com for live rates

The Nonconformist Revolution explores the evolution of dissenting thought and how Nonconformity shaped the transformation of England from a rural to an urban, industrialised society.

The foundations for the Industrial Revolution were in place from the late Middle Ages when the early development of manufacturing processes and changes in the structure of rural communities began to provide opportunities for economic and social advancement. Successive waves of Huguenot migrants and the influence of Northern European religious ideology also played an important role in this process. The Civil Wars would provide a catalyst for the dissemination of new ideas and help shape the emergence of a new English Protestantism and divergent dissident sects. The persecution which followed strengthened the Nonconformist cause, and for the early Quakers it intensified their unity and resilience, qualities which would prove to be invaluable for business.

In the years following the Restoration, Nonconformist ideas fuelled enlightened thought creating an environment for enterprise but also a desire for more radical change. Reformers seized on the plight of a working poor alienated by innovation and frustrated by false promises. The vision which was at first the spark for innovation would ignite revolution.

Article: Lewes’ influence since the Reformation as a dissenting hotspot explored in new volume as featured by

… there is a great deal to be learnt from this volume about the influence of nonconformists on the country’s transition to an urban, manufacturing society.

Amanda J. Thomas composes a book that describes well this river which then becomes a sea and leads to the modern age. I also want to highlight how in addition to historical research, there is a considerable research in the archives and in the genealogy of many of the characters in the book. Anyone who has done some small research on their families (and this is true in Italy, where I write from, as in the UK) knows that deception, the relative you did not know you had or what you thought you had but does not appear in the records is always behind the corner. Another point in favor of Amanda Thomas' ability and patience. A book that I highly recommend.

This is a great book if you want to know more about religious dissent and those determined individuals who would let nothing but death stand in their way. Recommended to history buffs.

This is a fascinating book for definite, and took me back to my university days. A compelling read throughout and certainly a book I can see being aimed at the university sector as it would be of benefit both to students and teachers. The author Amanda Thomas has done a fantastic book making it very clear and well written, I have to say that at the back of the book there is a huge notes and bibliography section. There is also a number of family trees to help the reader further. So in conclusion this is a very good that I would happily recommend to others.

It's very well-researched – at the back there are 70 pages devoted to family trees, notes, an extensive bibliography, and a comprehensive index. A topic that could be rather dry becomes much more interesting and more readily understood when presented in an historical context, and that's a credit to the author. There's so much in this book, and yet just one sentence could light up a dark corner of your family tree.

Based on the exploration of the various non conformist religions which sprang up in Britain in the medieval period, the author writes what is essentially a specialist work but is easy to read and very well written. She is highly regarded in her field and is for anyone who is curious about life in this period especially the poor and disenfranchised. Highly recommend for educators, students and lay people.