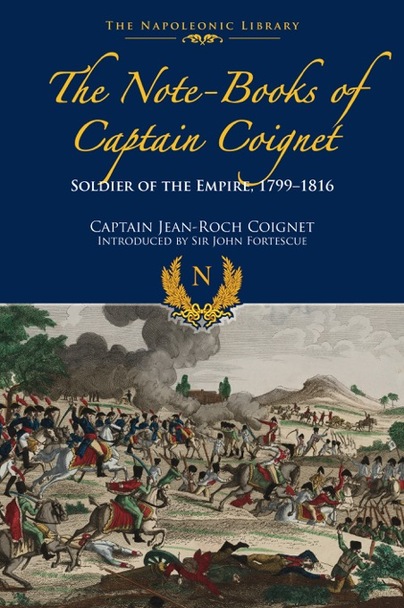 The Note-Books of Captain Coignet (Hardback)

Add to Basket
Add to Wishlist
You'll be £19.99 closer to your next £10.00 credit when you purchase The Note-Books of Captain Coignet. What's this?
+£4.50 UK Delivery or free UK delivery if order is over £35
(click here for international delivery rates)

Captain Jean-Roch Coignet was born a month after the American Declaration of Independence, and lived through three French Revolutions, two Republics, one Empire, and four Kingships. He writes truthfully of himself and his times in these fascinating memoirs.

In the pages of his note-book, Coignet relates the ordinary soldier’s views of the great campaigns and battles – Montebello and Marengo in 1800; the campaigns of Austerlitz, Jena, Eylau and Friedland in 1805-7; a brief dash into Spain in 1808, where he helped to pursue Sir John Moore, the campaign of Aspern and Wagram in 1809, the Russian invasion of 1812, with its sequels in Germany and France, and finally the dramatic conclusion at Waterloo.

‘The Note-Books of Captain Coignet stand alone among French military memoirs,’ wrote Sir John Fortescue. ‘His record of service is remarkable, embracing as it does every campaign of Napoleon as First Consul and Emperor … In no other memoirs, perhaps, can be studied so closely the inner life of the Army which for so long was the terror of Europe.’

A worthy addition to the Napoleonic bookshelf.

Coignet's appeal lies in the simplicity of his writing and his eye for detail. He grabs the reader's attention and keeps it. Not because it is great prose, but because it is like listening to an old veteran spinning war stories in a tavern. The reader is transported to the battlefields and campfires of campaigns of long ago, following the Eagle to both glory and defeat! And when you close the book you will be left with a greater appreciation for the motivation, valor, and sacrifices of the soldiers whose only ambition were to serve their Emperor!

Jean-Roch Coignet was born on 16 August 1776 at Druyes-les-Belles-Fontaines. He participated in sixteen campaigns and forty-eight battles, but was never wounded. An illiterate peasant, he was selected for the Grenadiers of the Imperial Guard, rising to the rank of captain. He began to write his memories after the death of his wife in August 1848. These were initially published in Auxerre between 1851 and 1853 under the title Aux vieux de la vieille. He died on 10 December 1865.