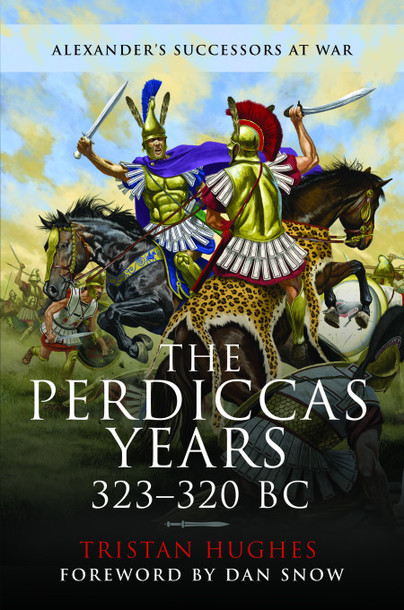 Alexander the Great’s death in Babylon that fateful day in June 323 BC triggered an unprecedented crisis. Within a couple of days, Macedonian blood had stained the walls of the chamber in which he died. Within a couple of weeks, Babylon had witnessed the first siege of the post Alexander age. Within a couple of months, a major revolt had erupted on mainland Greece. Within a couple of years, theatres of conflict had arisen across the length and breadth of what was once Alexander’s empire. From a Spartan adventurer attempting to forge his own empire in North Africa, to a vast horde of veteran Greek mercenaries heading home from ancient Afghanistan. From a merciless, punitive campaign against some of the most infamous brigands of the time to a warrior princess raising an army and pressing ahead with her own power play during this ancient Game of Thrones. What followed Alexander’s death was an imperial implosion. This book attempts to explain why it happened.

I religiously listen to Tristan Hughes on 'The Ancients' HistoryHit podcast, so when I saw that he had released a book on a subject I know to be his favourite, I had to give it a go. As expected, it was a clear labour of love.

Meticulously researched, yet readable, this is an excellent exploration of what happened after the death of Alexander. The convoluted and bloody story is developed carefully, each challenge extensively detailed. At times, it verged on repetitive, especially when it came to who people were, but this might have been more useful for those who had not met this period before. It was fascinating to see how quickly things fell apart and made me wonder how much longer Alexander could have held it all together.

Recommended for newbies and fans alike.

I enjoyed the Perdiccas years very much. It cast light on a period of history i knew next to nothing about it and held my attention throughout.


The author writes accessibly but meticulously, and builds up the necessary background context for the compelling history of the time and manages to humanize the major players despite the intervening millennia. He's chosen a chapter format which moves thematically (and roughly chronologically), through the military campaigns and jockeying for power which came after Alexander's death: the Lamian war(s), Bactrian, Thracian, Spartans, Perdiccas, and the Aetolian war amongst others. I'm not a historian, and many of these campaigns were previously unknown to me in any but the most general (haha) terms. He's included a very handy dramatis personae/glossary in the back of the book which proved invaluable to my understanding comprehension. I strongly recommend printing it out or using the search function on whatever electronic device readers use to make the whole read easier.

The book is meticulously annotated throughout. The author has cited period primary sources and later scholarly research to support the narrative. There are copious chapter notes, an exhaustive bibliography, maps, photos (of period artifacts) and a cross referenced index.

Five stars. This would be a great selection for fans of military history, as well as a superlative support text for related academic studies on the time period. This is listed as the first book in a series of historical studies of the time period. I'm looking forward to seeing what comes next.

Highly readable and informative account of the first few years after the sudden death of Alexander the Great, the multiple rebellions this inspired across the breadth of his newly-won empire, and the rivalries between his lieutenants that ultimately led to multiple bloody wars.

The book is packed with detail that I did not previously know, and does an excellent job of illuminating the very personal nature of the conflict, as good friends took up arms against each other, and supposed allies committed betrayals based on jealousy and greed.

The text entitled "The Perdiccas Years, 323-320BC: Alexander's Successors at War," published by Pen and Sword and provided to me as a ARC, is an excellent introduction to the troubled period of time that ensued when Alexander the Great died without a clear successor. For the three years that the book covers (and then some), Alexander's Macedonian/Hellenic Empire was shattered by civil wars as the "heirs" to Alexander's huge Empire struggled for position. This is a sweeping tale covering three continents and soaked in blood. The combatants were largely Macedonian troops (with a significant supplement of local tribes and mercenaries). The level of bloodshed, the utter ruthlessness of the leaders who figure so prominently in the tale, and the huge implications for world history going forward, all combine to make this a truly fascinating read. It is something like "Game of Thrones" meets 'The Lord of the Rings", the significant difference being that this is nonfiction! There are many lessons for us to take away from a perusal of this book, not least that as violent as we are in our warfare, we take a distant second to Alexander's generals and "Companions."All of the lessons we point to as we look at World War II and the proxy wars that followed, can be found just as surely here as we look at what happens when a superpower implodes. I highly recommend this book as few of us encounter this information in various classes we take yet it is critical to our history since Alexander's time.

Fascinating, well researched and presented in a way which is respectful of the material without getting caught up in the temptation to labour particular points at the cost of giving the full picture of events. I love it when historians bring their personal enthusiasm about a topic to bear and it is clear this book was a labour of love.

Tristan Hughes' The Perdiccas Years, 323-320 BC (Pen & Sword) is here to help us sort out all the shenanigans of the early Successor era. If you haven't wargamed Ancients, here is a fine place to start with similar but different armies for some big battle gaming. Have at it!

Tristan Hughes was born in Chichester and studied Ancient History at the University of Edinburgh. Having graduated in summer 2018, he currently works as a producer and presenter at History Hit and is the host of The Ancients history podcast. Away from history his hobbies include Latin dancing, curling and skiing.