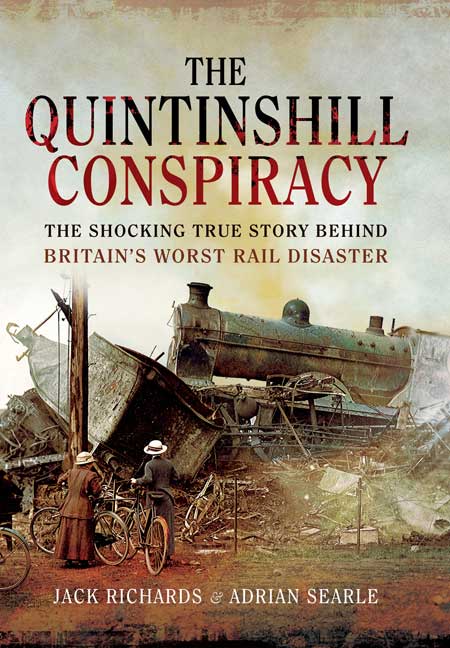 Add to Basket
Add to Wishlist
You'll be £17.50 closer to your next £10.00 credit when you purchase The Quintinshill Conspiracy. What's this?
+£4.50 UK Delivery or free UK delivery if order is over £35
(click here for international delivery rates)

Quintinshill was the railway's Titanic - a horrific crash involving five trains in which 230 died and 246 were injured, it remains the worst disaster in the long history of Britain's rail network.

The location was the isolated signal box at Quintinshill, on the Anglo-Scottish border near Gretna; the date, 22 May 1915. Most of the casualties were Scottish soldiers on their way to fight in the Gallipoli campaign. Territorials setting off for war on a distant battlefield, they were cut down instead on home soil – victims, it was said, of serious incompetence and a shoddy regard for procedure in the signal box. Two signalmen were sent to prison.

But startling new evidence reveals that the failures which led to the disaster were far more complex and wide-reaching than signalling negligence. The Quintinshill Conspiracy – The Shocking True Story Behind Britain's Worst Rail Disaster exposes what really happened, and why.

The author follows from painstaking research not only the detail of the totality of the disaster itself but also of its immediate aftermath.
This is not just a book for railway enthusiasts. Albeith wordy, it is a true study in investigative research and possibly the final chapter on this calamity. It is totally recommended.

Aptly described as the 'blackest day in British railway history' where the terrible and moving events and the wide reaching failures as well as the extraordinary attempt to hide the truth.
The book reveals new evidence, with far more people implicated than the two originally named.

A must-have on any Great War bookshelf. First-class work.

'...takes a fresh look at the tragedy on the 100th anniversary of the crash,'

'...startling new evidence uncovered ...reveals the failures which led to the tragedy were far more complex.'

This is a compelling read and the authors are to be congratulated on a first rate piece of detective work.

Events, laws and personalities are meticulously followed up and no available record seems to have been left unturned.

A gripping read, which blows apart the days of a more secretive society to allow us to better understand what really went wrong and why.

I asked for this book to review as the main casualties of this rail crash were members of the 7th Battalion The Royal Scots, which happens to be my old Regiment.  It tells the story of a horrific crash on 22 May 1915 involving five trains at Quintinshill signalling box and the passing spurs at that point.  The vast majority of lives lost were on the troop train carrying half of the 7th Battalion on their way to Liverpool for embarking for overseas service in the Dardanelles.  230 people died in that crash or shortly after and 246 were seriously injured, of the dead 214 were Royal Scots.

The authors go to great detail to give the circumstances of the accident and reasons behind it. There is so much that nearly one hundred years on will never be fully discovered but what is certain is that the authors have given us a comprehensive view of the crash and the aftermath.

I came to this book to read about a tragedy that happened to my Regiment and was drawn in by an excellently written book.  This is not just a book about a train smash, nor just about the corruption in the railway system but is a book about how society in Britain worked in the early part of the 20th Century.  I was surprisingly drawn in by the way it is written finding it easy to read, follow and to feel outraged by what happened.

A well researched and written book on the worst rail disaster in the long history of Britain’s rail network.

“The details of this accident are vividly described.”
“Unpicking the details… involves a certain amount of technical railway detail, and the authors work hard to make this comprehensible, with a fair degree of success.”

Jack Richards and Adrian Searle have closely examined all the details of the incident, including many previously undisclosed documents. This closely argued, almost forensic study, shines new light on a tragic disaster that is now almost a century old.

Prior to pursuing a career teaching music, Jack Richards was employed in the railway industry, working for a period in a train control centre. Maintaining a life-long interest in railway history and close links with the rail industry, he has chaired a rail user group and a community rail partnership and has served as a member of the Rail Passengers Council, on whose behalf he contributed to research and publications.