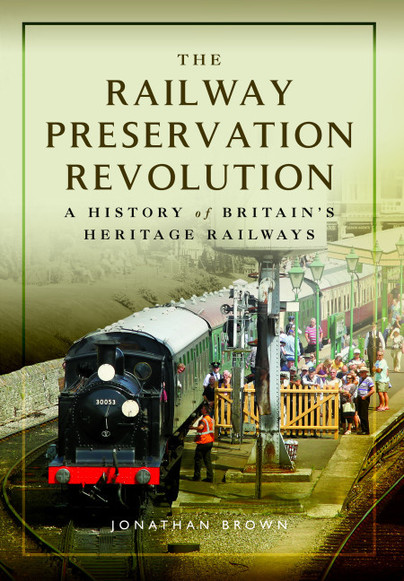 A History of Britain's Heritage Railways

Click here for help on how to download our eBooks
Add to Basket
Add to Wishlist
You'll be £12.00 closer to your next £10.00 credit when you purchase The Railway Preservation Revolution. What's this?
Need a currency converter? Check XE.com for live rates

A ride on a steam train is a popular family outing. More than 100 heritage railways cater for that demand, capturing the spirit of nostalgia while preserving the engines and equipment of past days of rail travel. Their interests even extend to the modern era of 1960s-70s diesels.

Those heritage railways themselves have a long pedigree, back to 1951, when a group of enthusiasts saved the Talyllyn Railway in mid-Wales from closure. They ran this railway as volunteers, out of their love of the little trains and a desire to keep it going. Their example was followed by many more preservation societies who preserved and restored branch lines, country lines and industrial lines for our enjoyment now.

Six decades have passed, and we are now beginning to realise what an impressive history the heritage railway movement has. This book traces that history, from the humble beginnings the hopes and ambitions of the pioneers on the different railway projects. There were times of failure and frustration, as some fell by the wayside, but others have made it through times of adversity to become the major heritage businesses of today.

An enterprising, ambitious book, superbly produced and illustrated. Assiduously referenced, it has a useful bibliography and index.

A conscientious and well documented work.

An extremely informative and thoughtful account of an important phase of recent railway history. It is well produced with an interesting selection of almost all colour photographs. There can be few people with an interest in today's railways who will be unmoved by the heritage aspect.

A well researched and written treatise running to over 300 pages and emphasising problems which have to be overcome, not least financially, by promoters of preservation schemes.
A very readable and informative book.

This superb book reinforces the notion that the people of this country, together with our tourist friends from all over the world, can see the benefits of reviving and maintaining the various heritage railways that now run in our little country. There is an appetite for nostalgia that was never satisfied so well as with a journey on a steam railway. Magical.

The overall result is a well-rounded account, written in an accessible style, of how over more than 65 years the railway preservation movement has grown to be the heritage sector of the railway industry. Just about every line in operation is covered to some degree together with details of a good many projects which never got off the ground.

Mr Brown discusses a wide of topics including finance, marketing and governance. The last mentioned details the wide range of corporate structures, ranging from the purely commercial operations, through the PLC and supporters club approach to the mutual and co-operative, often volunteer controlled, end of the scale as typified by the K&ESR’s Company Limited by Guarantee. This is a ‘warts and all’ account and he addresses the sometimes difficult topics of relations between paid staff and volunteers and disputes between Board and workforce. He also honestly looks at such ‘unmentionables’ as volunteer antipathy towards professional general managers and the fact that different groups of members within the same railway often don’t like each other.

If you want an in-depth account of how heritage railways have got to where they are read this book. It is thoroughly recommended.

After research at the University of Manchester on the rural history of Lincolnshire, Jonathan Brown has worked in a number of capacities for many years at the Museum of English Rural Life, where he is now honorary fellow. He has written widely on rural history, with books including The Rural World of Eric Guy, Farming in Lincolnshire 1850-1945 and Steam on the Farm.